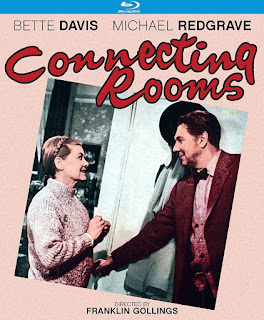 I adore classic Hollywood films and its legendary children it produced. Grand movies and even grander movie stars is what fuels my obsession. After the Golden Age most out of work actress's (and some actors) turned to the horror genre kicked for work. This trend was kicked off by Whatever Happened to Baby Jane (1962) which starred Joan Crawford and Bette Davis. This was both a blessing and a curse as it gave Davis and others a jump start in their career but it also type casted them. Davis jumped at the chance to take a break from the horror genre with Connecting Room (1970). Connecting Room tells the story of a cellist named Wanda (Bette Davis) living in a ruin down boarding house in early '70's swinging London. She regularly interacts with a fellow lodger named  Mickey (Alex Kanner) a shady musician who often tries to use her for money. A down-on-his-luck disgraced teacher named James (Michael Redgrave) moves in next door and the two find a special bond. 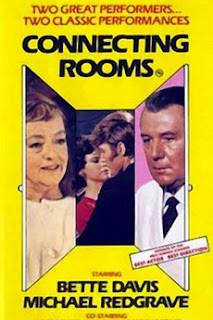 Despite being a huge fan of Davis and Redgrave I had never even heard of this film before. I later learned I was far from being alone. Connecting Room is....really something. This was Gollings first and only film and it shows. It lacks polish in its direction and worst yet certain important plot points seem confusing and ill-handled. Franklin has a hard time keeping the emotional core of the film intact while juggling needless sub plots. For example you get a weird tug-of-war with this film being told through the lens of a care free swinging youth played by Kanner and the quiet moody drama that no doubt drew Davis and Redgrave to the film. Gollings isn't seasoned enough to marry these two themes in a successful way. Had they ditched Mickey and his entire sub plot it would have streamlined everything nicely. Also important information regarding James is woefully, even laughably mishandled to the point of confusion. (More about this in the commentary). It also hasn't aged well and even at the time critics labeled Connecting Room as old fashioned. This goes double as the film leans way in on swinging 60's (it was filmed in '69) vibe. What saves the film and makes it watchable is the camp appeal and the film has some so-hammy and bad its kinda great. Davis does her best to give pathos to Wendy but sadly she over-acts a lot. On the flip side Michael Redgrave gives arguably his greatest performance  as the tossed aside teacher. He brings with James a heavy heartbreak which hangs heavy in his eyes and the way he carries himself and delivers his lines. His character and acting gives the film the emotional weighty it sorely needs. Alex Kanner probably best known for The Prisoner is also very good despite his character being pointless. Kay Walsh also gives a very fun turn as a nosy bitchy landlady. Connecting Room (1970) is a very odd and up until now a very little known movie. There is a very good film in here but it gets lost because of its lack of story streamline and tonal coherence. Had this been in the hands of a better director this could have easily been a classic in the twilight of Ms. Davis's career. Still, I find it weirdly endearing mainly due to its incredible cast especially its two leads and its so-bad-its-enjoyable nature. Not a classic, even in a cult arena but worth checking out for the morbidly curious.

Kino Classics has given this under-seen movie a new life with its Blu Ray release. The picture looks great and the big bold colors (especially in the '60's era club) really pop with this new transfers. Skin tones look nice and natural and details come through crisp and clean. The sound is also nice with a health 2.0 Mono track. Dialogue is clear and easy to understand. The film has a gem of an extra in the form of the commentary.The legendary film historian David Del Valle provides the track and if you are familiar with Valle's other commentaries you know they are fun, lively but most importantly packed to the hilt with amazing information. He knows his stuff from a wealth of research but also his personal relationship with Room co-star Richard Wyler.  You just cant help but hang on his every word. Overall this is a strange film that, misguided as is was is worth while even if its for its campy retro quality.