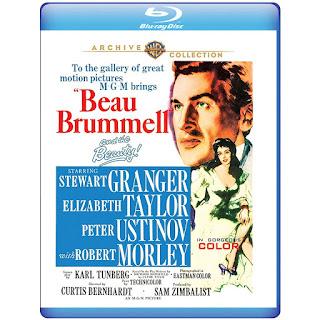 Based on a play written by Richard Mansfield Beau Brummell tells the story of the outspoken Captain George Brummell (Stewart Granger) whose brash and forward nature lands him in some hot water with none other than the Prince of Wales (Peter Ustinov). The head strong Brummell is fired by the Prince but the pair strike up an unlikely friendship and Brummell is given the post as his personal adviser. What follows is a love affair with Lady Patrica (Elizabeth Taylor) and his navigating politics and his friendship with the Prince. Beau Brummell is one those lavish big budget technicolor film that feels slightly outdated even in the '50's.  With a, for the time big budget of over a million-dollars it was not a hit with audiences but has gained a cult following due to showings on channels like TCM. But is it worth seeing? There is no doubt that the film is filled to the brim with talent as it was written by Karl Tunberg (Ben-Hur) . Tunberg clearly knows how to write a solid and layered script and I found myself engrossed by Brummell and his relationship with Ustinov's character. The finale with the two I wont spoil but ill just say its bitter sweet farewell. Beau also enjoys a very big and expensive scope aided by the Oscar winning DP Oswald Morris (Lolita, Fiddler on the Roof). Not to mention some very splendid production design and costumes which is no doubt why the film was so costly. 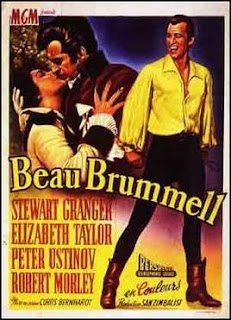 Needless to say if you love grand lavish historical romances -this is the movie for you. However if you find those elements tedious you might find it a bit of a slog to get through. I found some of this movie to be a bit boring and it does lean way into its dialogue heavy scenes which is always hard to make interesting. Also if I am being totally honest I found Stewart a bit dull as the titular character. Indeed Granger himself was not a fan of this role, though it would become the character he is best remembered for. It pains me to think that Kirk Douglas was at one time considered for the role instead. Douglas would have been by far the better choice. Dont get me wrong I think Granger was a fine actor but the issue is he seems to be out shown his co-starts Peter Ustinov (later to be knighted in real life) and of course Taylor who sparkles as Lady Belham because well...she was Liz Taylor a brilliant actor and force of nature. Robert Morley best remembered by horror fans in the film Theater of Blood (1973) also has a small but very fun  role as the mad King George the III.
As I stated above the film has its loyal fans so your mileage of this kind of film my go further than mine.

Warner Archives has cleaned up this sixty-plus year old Technicolor film to its former glory and beyond. Colors and rich and pop out and showcase the big budget splendor and great cinematography of Oswald Morris. Small details really stick out especially within the detailed costumes and production design.  The sound design is great as well boosting a healthy 2.0 Mono track. Dialogue is clean and clear. No features are included on this release.