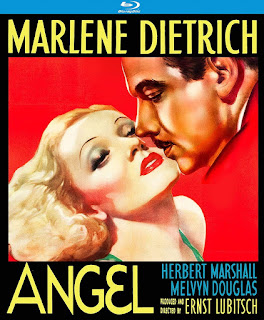 Ernst Lubitsch was so legendary for his style that the term 'the Lubitsch' touch was coined to describe his trademarks. His films often showcase lavish production values, grand stars and he reviled in sophisticated wit. Though he worked in many different genres the director is no doubt best remembered for his romantic comedies. Angel (1937) is one such film that sparkles in his filmography. Based on a play by Melchior Lengyel the story tells of a woman named Maria Barker (Marlene Dietrich) who meets a mysterious handsome stranger named Anthony (Madelyn Douglas). The pair fall in love but of course Lady Maria is married. Romance and comedy ensues as the two men find themselves under the same roof. I adore romantic comedies from the '30's and '40's that depicts a grand almost non reality form of melodramatic love. Lubitsch with the aid of screenwriter and frequent corroborator Samson Raphaelson (Alfred Hitchcock;s Suspicion, The Shop Around the Corner) pens a funny, witty romantic comedy that zings and tugs at the heart strings in equal measures. Cheeky double innuendos also seemed to just squeak by the Production Code. 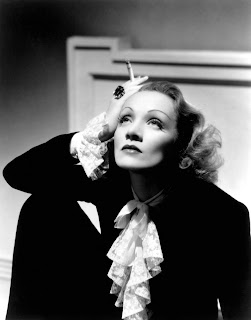 The cast is great and of course the Goddess Marlene Dietrich steals the entire film. She displays the kind of talents and beauty that cemented her as iconic. Herbert Marshall and Melvyn Douglas are equally wonderful and as always walk a fine line between the dramatic yet and comedic timing when called for. All three leads seem to feed off each other and its spellbinding to watch them act and interact with each other. Angel features beauty black and white photography by legendary cinematography by Charles Lang.  Lang photography absolutely makes love to Dietrich. With his skills he uses his lights and shadows to fully capture the wild alluring and sinfully seductive aspects of her persona. While were on the subject, Lang also does an interesting thing by using shadows on faces in certain scenes to give a moody, almost haunting look that sets the scene for the more weighty moments of the film. Truly brilliant work and its not hard to see why Lang was and still is regarded as one of the best DP of the Golden Age of Hollywood. We the audience are also treated to an underrated score by Oscar nominated composer Friedrich Hollaender. Fast paced, well written and features the top talent both behind and in front of the camera, Angel is a gift to classic film lovers from heaven.

Kino Classics and their other subsidiaries have set a very high standard with their 2k and 4k releases. I know when I get a Kino release its going to look and sound its best and Angel does not disappoint.  Lang's gorgeous and lavish photography is truly celebrated with this new 4k release and its clear to see a lot of time and resources have gone into it. Almost every bit of dirt or artifact has been scrubbed and the result is a clear and stunning picture. Its safe to say that this is the best this came has ever looked and most likely will ever look. Along with WA's Dodsworth this is a incredible achievement in film restoration. They truly did Ms. Dietrich proud on this one! Equally well done is the sound and features a nice healthy 2.0 Mono track. Dialogue is clear and crisp and it showcases Hollanders score. Special features include a great feature length commentary by How Did Lubitsch Do It? author Joseph McBride. Engrossing and interesting, this commentary track gives a lot of great information and context behind the film and its power house director. Rounding out the features is a trailer. If you are a fan of Classic Hollywood this is a must own!