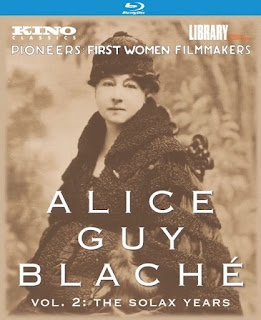 Released alongside Vol 1: The Gaumont Years Kino Classics has released the second volume which showcases the period of work of Alice Blache between 1911 through 1914. These are the years that the maverick filmmaker was given more freedom and she used that to experiment with longer forms of storytelling

In volume 2 we get to see how Guy has took what she learned starting in the early 1900's and expanded his craft, this time experimenting with more narrative driven stories. In just over a decade you can really see how she is fine tuning some of the rough edges while also retaining her style and voice as a filmmaker. Some of the work includes Guy dipping into melodrama, something we didn't really see in Vol 1. Probably most interesting is the drag-queen comedies included. Looking at all these films together you really start to get a bigger picture of the work of this talented trailblazing woman director.

Like in Vol 1 Kino Classics have got done themselves with 2k and 4k restorations from materials provided by: The Library of Congress, British Film Institute, FYE Film Institute,  Lobster Films, George Eastman Museum etc. As with the first volume Brett Wood walks us through the Restoration Comparisons. As I said in my last review I found this very engrossing and Wood is an unsung hero with restoring important films in addition to his film-making career.  A booklet is included  by film curator Kim Tomadjoglou. Its so interesting to follow the evolution from her work from 1896 to 1911 and I hope we get more volumes in the future. A worth addition to any filmmakers collection.