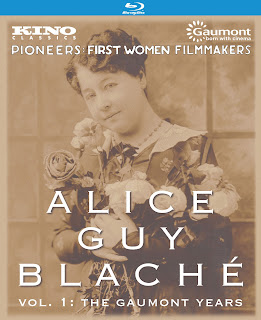 Kino Classics released Pioneers: First Women Filmmakers (1911-1929) in 2018 and now has expanded on that that with three new releases: Alice Guy Blache Vol 1, 2 and The Intrigue: The Forgotten Films of Julia Crawford Ivers all of which I will be reviewing. First off I will say my knowledge of early female directors are woefully limited. But thanks to Kino Classics thats all about to change with their newest collection showcasing the works of filmmaker Alice Guy Blanche. The French born Alice worked as a typist at the Gaumont company (hence the Gaumont years) and later on would make a series of short films. The films we're well received and she was made head of production for the studio.

Part I: Babies, Cabbages, and Gender
The Cabbage Patch Fairy
Midwife to the Upper Class
Madame Has Her Cravings
The Hierarchy of Love
The Results of Feminism
The Coming of Sunbeams (Bonus)

Bonus Films: Bathing in a Stream
Bathing in a Stream
Serpentine Dance by Mme. Walter
Turn-of-the-Century Blind Man
At the Hypnotist's
Illuisonst Scene
At The Cafe
Wonderful Absinthe
At the Photographer's
Automated Hat and Sausage-Maker
Aveune De'l Opera
Dance of the Seasons Winter Snow Dance
Turn-of-the-Century Surgery
Serpentine Dance by Linda Esbrard
How a Monsieur Takes His Bath
What is a Flag
The Birth, The Life, and the Death of Christ
On the Barricade
The Race of the Sausage
The Banknote
The Standing Clock

Kino Classics have curated some incredible pieces of film history from a name that has for too long gone unknown. It's hard to choose a favorite as each piece has its own special magic. I was stunned at not only how innovating the film techniques were but also the wide range of subjects that Blache covered. Its not hard to see just how ahead of her time she was and truly helped blaze a trail for other women in cinema. Its great that Kino gives you the option to view the entire collection together (run-time 75 minutes and thirty seconds) or individual short films. The select films option is also broken up into three parts (as listed above) further giving audiences a convenient guide. Its these little touches that puts Kino into a class of their own.

The films have been lovingly restored using the original negatives that thankfully survived after all these years. To give you a better idea just how stunning of a transformation Kino has, as a bonus included a short feature on the process. This segment lasts over three-minutes in length and has a running commentary by Bret Wood the man behind this restoration and many others. I found this really enjoyable and I suspect other film buff's will as well. To help put the films into its proper context we a booklet besides including the films in the order they are presented as well as a highly interesting article by film curator Kim Tomadjoglou.

Kino is a label that has always championed early cinema but also the amazing films women have made. This set was totally engrossing and I am excited to tackle the second volume of Alice Blanche's works.