The original Xtro (1982) and its sequel are currently not available on Blu Ray in the US (though a Region Free version exists of part 1) but thanks to the good folks at Vinegar Syndrome we have the third film in a stunning new 2k transfer. A motley crew of soldiers have been sent out on a remote island with a mission to disarm old but active explosives. But of course they find something far more deadly awaiting them. As the soldiers get picked off by an unknown entity its clear that a sinister cover up that goes all the way to the top. Xtro 3 wastes zero time in setting up its goofy tone with a humorous mock- news reel from the '50's. This is a perfect opening because right from jump its clear that the filmmakers are doubling down on the b-movie aspects. And that is incredibly smart because sci-fi/horror was popular in the '50s and this has very much feels like a modern take on those b-grade films. The crappy dialogue, bad effects, rubber-like alien and disjointed plot all plague the film but if you see it as a throw back film it makes it more fun. 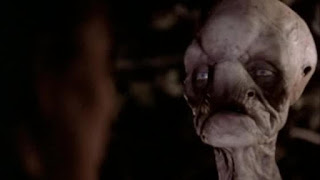 Xtro wants to have its glip-glorbs and intro-absorb it too, meaning it has a tonal problem. Its campy and has its tongue planted firmly in its cheek it does feel like it tries for something earnest as well. The gore while a nice addition also seems to fly in the face of its b-movie DNA. Sure, I think its possible to have all these things in one coherent film but, but like marrying horror and comedy, its a tricky undertaking. And the writing isnt nearly polished enough to balance both the serious and in-joke humor and '50's b-movie homage and the splatter. A great example of this is Brain-Damage AKA Dead-Alive (1992) which perfectly melds b-movie, comedy and over-the-top gore. In Xtro those elements feel tacked on rather than organic to the plot

I found myself forgiving a lot though because Xtro 3 reminded me a lot of those really bad but kinda fun Sci-Fi Channel movies (later re-named SyFy) they would play on the weekends. I suspect others grew up with these kinds of movies as well and thus the film feels nostalgic. Those who do not like these kinds of bad early-mid-'90's sci-fi outings will no doubt find this a big gloopy mess of a movie. And really it is, the story is not really original, in fact plays out like a splice of better sci-fi plots strung together. Again I didnt mind this because I was rolling with the camp b-movie quality but I know thats not for everyone. Xtro 3 is entertaining despite it being so inept in a lot of ways. My chief issue was, they should have taken the tongue-in-cheek further and went full parody much like Mosquito (1994) a movie released just a year earlier. Wisely the director was on its own joke and I think thats what really saves this film overall.

Vinegar Syndrome is a wild card when it comes to what they will release. Its what makes them such an interesting and exciting video label. Lately they have been focused on neglected '90's films and I am very happy about that. Xtro 3 looks great in a nice brand new 2k transfer. The image looks well balanced with colors that pop and details that look sharp. This also means the alien looks rubbery at times but again its a b-movie so just roll with it. Its great sound wise as well sporting a crisp and clean 2.0 mono track. The film has a lot of sound effects and the balance in the audio is spot on. As always we get some fun extras. This includes a interview with the director Harry Bromley Davenport and writer and actor Daryl Haney. Both a very entertaining and sheds some light on this film. Rounding out the features is a Trailer.

It seems odd that Xtro 3 would get a stand alone disc and not part of a trilogy boxset but I suspect that has something to do with either rights issues or negative issues, because I have no doubt VS would have rather done this as part of a set. In any case i'm very happy we got this release and I hope they get parts 1 and 1 in the future. If you like '90's b-sci-fi schlock-they run dont walk and pick this title up.