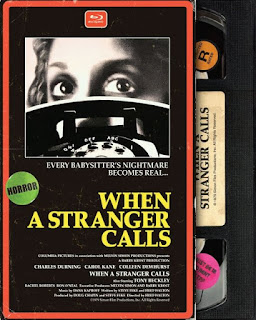 When a Stranger Calls exists in a post Black Christmas (1974) post Halloween (1978) era but came out just before the slasher genre exploded a year later with Friday the 13th (1980). I wouldn't call this film a body-count horror outing but certainly shares the same DNA. Interestingly the film is based on a urban legend which is loosely based on a real life baby sitter that was murdered. The story is very short so of course the film expands on it -for better or worse. Jill (Carol Kane) is babysitting one night when she starts to get phone calls telling her to check on the children. At first she dismisses this as a weird but ultimately harmless prank but of course its far worse. The twenty odd minutes of Stranger Calls is a master class in incredibly tense minimalist terror. Kane with her big doe eyes creeping around the empty dark house as a flood of menacing calls truly sells the terror. And as jaded as I have become over the years, damned if I still dont get icy chills down my spine during the films pulse pounding first act. 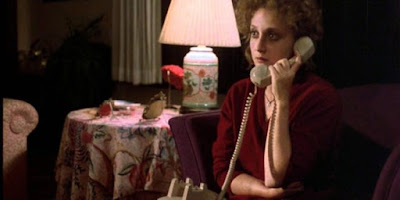 And while this is a great way to open a film it also hurts it in a way as the second struggles to come close to it. When ensues is a tepid cat and mouse game between Curt Duncan (Tony Beckley) and the detective played by Charles Durning. I was amused by some of the films more over-the-top moments like Durning Hulk smashing two double doors which had me doubled over in laughter the first time I saw it. Its these campy moments and the great cast which helps this movie from becoming a total slog. As I mentioned earlier Kane gives a great almost silent star performance and her big eyes and unconventional looks seems to be right on point with tension filled scenes. Charles Durning plays the male lead and, what can I say hes Charles Durning he's enjoyable to watch even if it is hamming it up. The supporting actors are great as well with as Colleen Dewhurst and Tony Beckley who seems to be having a lot of fun playing the films English boogeyman. Cult actor Rutanya Alda has a small appearance as well.

A friend described this film as a a meh sandwich in between the best tasting bread. And the more I thought about it the more that is the perfect way of describing the film. The opening is so influential and its clear that Craven was inspired by it for the opening of Scream (1996). After that despite shades of tension and some enjoyable camp moments the second act feels like a bit of a let down. Then the final act once again has a nice pace and energy when Kane's character comes back into the picture. I wish the second act could have been more interesting and touched upon John (Charles Durning) and his obsession with the killer Curt in more depth. I honestly think had the opening not been as memorable and it didnt have that iconic performance by Carol Kane this movie wouldn't be the 'cult classic' it is today. I dont think this is a bad film but its just kind of meh in its second act which hurts the overall film.

Mill Creek Entertainment has-re-released When a Stranger Calls in its VHS style Blu Ray. The packaging is a lot of fun and the MC team clearly are fans of the rental days. The print itself is actually really good and features bold colors, natural skin tones and night scenes benefit greatly from this HD print. The sound is also great with a nice 2.0 mono track. Sadly the Blu Ray doesnt have any extras but this also means that you pay a lot less and the film retails for under ten dollars. And thats the thing about MC, if you just want the movie and minus the frills the label offers movies that are affordable and often times the prints are quality. Its also worth noting this is the only North American release of the film on Blu Ray currently. A Limited Edition UK edition was released last year with some nice extras but you`ll need a region free player and at least 50-60 bucks. So if you want an affordable way to see this in HD this Mill Creek release is what you`ll want to pick up.