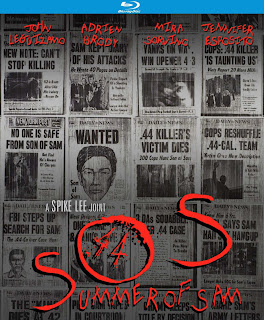 Rumor has it Spike Lee had originally intended his 1999 film Summer of Sam to be more focused on the killer with the film initially called Son of Sam. I find this unlikely as Lee's films often focus on communities and I cant help but think he always intended Summer to be as is. During the summer of 1977 the night air was full of disco dancing, Star Wars was still smashing box office records and a killer was stocking its prey armed with a .44. The film centers around a handful of characters during the Son of Sam's reign of terror and its impact on its neighborhood. As the July heat swelters so does the chaos and insanity within the town. Love him or hate him you cant deny that Spike Lee is a force within the film landscape. Its been a long time since I've seen Summer of Sam-honestly probably over ten years. Now with Kino Studio Classics re-releasing a brand new Blu Ray I was excited to re-visits it. 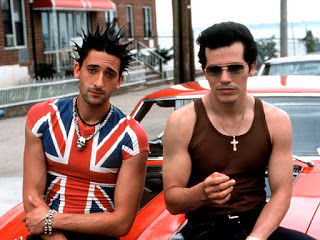 This is largely considered one of Lee's most devious films which is really saying something. Summer has a lot of big ideas and is incredibly ambitious but I feel like it isn't as good as the sum of its parts. So lets discuss what works about this film. The entire cast is brilliant and while Brody and the rest shine I have to say its Leguizamo that truly steals the show. His charm, energy and natural acting chops brings to life what might seem like a terribly uninteresting character on paper. The cinematography is also very engaging and done in a nice raw almost documentary style. But as I said the film has great parts but overall is a mess. Spike Lee isn't one for short films and Summer feels over indulgent and bloated with a run time of nearly two and a half hours. Needless to say the film could have used a tighter pacing and a trim of maybe twenty minutes or more. But maybe what bothered me the most about this film is its so mean spirited. Summer of Sam has no issues with negative stereotypes in fact it feels like it reviles in it. The biggest target seems to be against the LGTBQ community. Not only does the film banter around homophobic slurs but features a character which is beyond flaming and not only is he mocked but worst yet burnt with a cigarette. Of course this is not important to the plot but an excuse to portray an ugly stereotype and violence against people of LGTBQ. I totally dont understand why filmmakers feel the need to do this, back then and sadly still today. You also cant help but find the segments with the Son of Sam (played by Michael Badalucco) reeks of lime green tinted pretentiousness. It really is cringe-worthy.

This is a shame because I love the idea behind this movie. Its wonderful smart to build this movie around the hot hazy summer of '77 and how the senseless murders can in fect an already broken community already on the brink of destruction.  There is no doubt that this film is well shot, well acted and edited and features a killer soundtrack. But all this great stuff feels like its undone by its overly drawn out run-time and at times spiteful attitude. The way it normalizes and seemingly promotes hate speech and violence I found incredibly off putting.

Kino Studio Classics has re-released this for its 21st anniversary.  The picture looks great and it looks to be sourced from the original film material. The film has a unique color palate and this upgraded release showcases that. As I said the soundtrack is great and the audio sports a nice 2.0 AND 5.1 track. The film features a vintage commentary with Spike Lee and John Leguizamo. It also features an interview with actor John Leguizamo. Rounding out the features is a trailers. Kino has rolled out a total of five Spike Lee movies: Jungle Fever, Summer of Sam, Clockers, Crooklyn and Mo Better Blues.