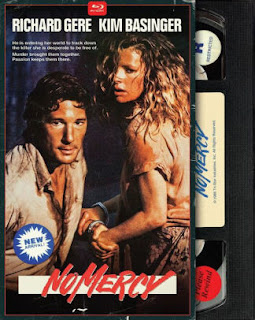 Richard Gere and Kim Basinger were two young hot stars on the rise in the '80's. Gere prior to this just came off hits like An Officer and a Gentleman (1982) and The Cotton Club (1984) both putting him firmly on the Hollywood map. Basinger at this point was riding high off her role in Never Say Never Again (1983) and The Natural (1984) and like Gere, her star would only get bigger throughout the '80's and '90's. In 1986's No Mercy both these mega-stars collided.

The film follows a cop named Eddie (Richard Gere) whose after revenge after his partner is killed. He soon becomes embroiled in a deadly game of cat and mouse as he seeks out the truth as to who killed him. Along the way he meets Michel (Kim Basinger) the girlfriend of the lead criminal. 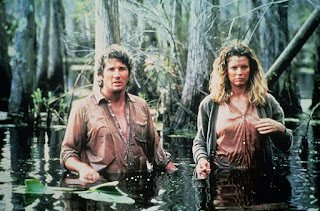 No Mercy starts off with a fairly brisk pace high energy and Gere oozes that charm that helped make him a Hollywood mainstay. So, before I get into what is wrong with this film i`ll mention a few things I liked. The film is surprisingly well shot with some very visually interesting moments especially in the early portions of the film. And speaking of, that first action sequence in the cow pen (it sounds weird but just go with it) is tense, well photographed and engaging as hell. Its that kind of pacing and excitement I was hoping the film could maintain but sadly it does not. The filmmakers seem to have pardon the crude expression shot-their-wade in act when and the rest of the film falls short.

The dialogue is as corny as you`d expect and while the dated '80's back drops helps add to the charm to the film its also woefully outdated in its attitude towards women and the film has heaps of sexism. But dont worry there is overt homophobia thrown in for good measure. Credit where its due the action scenes are for the most part well done but this is sadly over shadowed by a wildly disjointed and frankly Meh plot. Mercy is filled with stock bad guys, a stock revenge motive and a generic love story thrown in for a general audience. A better title for this movie should have been 'Sexy Sweaty Couple: The Movie" because it feels like the very thin plot was built around the rising star power of its two leads. Indeed both actors do a fine job with what they have to work with but every thing is so by-the-numbers and shallow that it feels like a slog to get through. I had never actually heard of this movie until this release and now I understand why- outside of its two lead stars this is an altogether forgettable film. I wish it was so bad its good but its so bland it doesnt even do that correctly.

Mill Creek Entertainment in is Retro VHS series has done a nice job with its re-release of the film. The packaging is a fun throw back to the rental days of old and I love that they are doing this with their '80's and '90's releases. Picture wise is good but at times feels unstable-this is only super noticeable doing the club scene at the start of the film. Overall though its a nice clear print with skin tones that look natural and thankfully you dont get a washed out or over blown brightness. The audio is good as well with a crisp and clear 2.0 track. As with other MCE releases this is bare bones but you also will pay a lot less. While extras are always nice sometimes you dont want to pay more for them. I wasnt a big fan of this movie but if you are this is a nice affordable release.