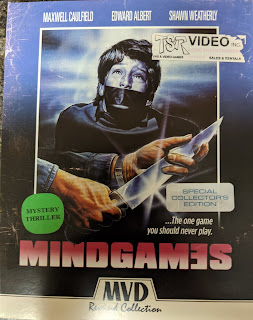 Mind Games (1989) is a video era movie that somehow escaped me, however thanks to MVD's Classic Rewind thats not longer the case. The film follows a married couple Dana (Edward Albert) and Rita (Shawn Weatherly) who are going through a rough patch in their marriage. Along with their son Kevin (Matt Norero) they decide to get away on a camping trip to reconnect. Kevin decides to do some exploring by himself and meets Eric (Maxwell Caulfield) a likable but odd young man. Eric starts to spend more and more time with the family but of course he soon starts to show disturbing behaviors which ends up deadly. Mind Games on paper sounds like an interesting psycho-thriller but sadly its a rather dull affair. I think the major issue is a sloppy screenplay.  This is the only feature film screen credit for Kenneth Dorward which previously only worked on some episodes of Chips and Emergency. Its not hard to see that Dorward is utterly out of his depths in terms of crafting a compelling psychological thriller. 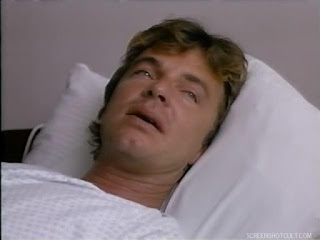 Kenneth has a hard time writing a well structured three act film that is paced correctly.  For example just when something interesting happens the film doesn't build off that but rather pulls back which means stopping the film dead in its tracks. It feels like things are needlessly drawn out to get to a feature length runtime. What we are left with is a film filled with boring subplots, sappy sentiment and clunky and cheesy dialogue. And while were on that subject its clear that Kenneth has a hard time writing women well. Rita comes off like an unlikable shrew and the dad comes off like a corny and bland. Director Bob Yari tires to inject the film with some atmosphere but there aside from a few creepy set pieces it all gets side tracked by needless filler which breaks any of the tension he tried to build. I frankly found myself bored for a lot of the film.

The acting is...really something. And while I rarely like to single someone out I feel like this warrants a mention-Shawn Weatherly is laughable bad in this. Her performance is wooden and is either way under played or way over in any given scene. Alberts is a little better but he also ends up feeling lifeless but does what he can with what he's given. The real standout is of course Maxwell Caulfield. Caulfield played the villain in another movie I recently reviewed The Boys Next Door and like BND he is creepy yet has good looks and charm and its very believable that total strangers would not only like him but invite him into their lives. Its a shame because Maxwell really feels wasted in this soap-opera level potboiler.

Early on Mind Game showed promise with some unnerving scenes especially those involving Eric and Kevin, alone together. It had a disturbing air of mystery and danger however screenwriter Kenneth and director Bob Yari are unable to sustain or build a good level and tension or engaging plot. We do get a nice, albeit late third act reveal behind Eric's true motivation but it comes too little too late and some hints or clues or build up might have given this reveal a bigger payoff. Its disappointing as this looked like an interesting movie and im a sucker for late '80's and '90's psycho-thrillers. This one is pretty forgettable aside from Maxwell's blistering performance. One word. Meh.

MVD Classic Rewind features a nice retro VHS cover and I have to give the design people a huge shout out because it looks great. The partly scratched off video store label was a nice touch. The picture quality is nice sports a nice new transfer in 1080p. Colors pop and skin tones are natural looking. The 2.0 Mono soundtrack is great and the music and dialogue cheesy as it may be comes in crystal clear in this release. Impressively this release has a feature length documentary on the making of the film as well as a nice profile of Bob Yari who went onto a very successful career producing movies. As always a nice foldout poster and reversiable cover art is included. This is another case of an amazing release for a so-so film.