It Started with a Kiss (1959) Warner Archives Blu Ray Review 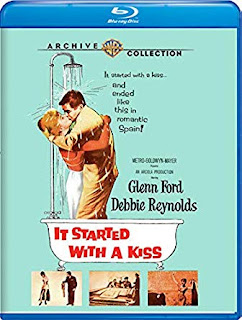 The world truly lost a icon of the Golden Age of Hollywood when Debbie Reynolds died in 2016. She left a legacy with her daughter Carrie Fisher and a wealth of classic films. Reynolds was also incredible instrumental in preserving film props and costumes, some of which was literally saved from the dumpster. Warner Archives has released a late '50's rom com to help shake away the winter blues. Maggie (Debbie Reynolds) is bent on landing a rich husband during a charity raffle content but she ends up snagging the handsome Sergeant Joe Fitzpatrick (Glenn Ford) instead. Their love affair was started by a passionate kiss and ended with them marrying each other shortly thereafter. When the couple have some bumps in their marriage Maggie thinks maybe the only thing they love about each other is-gulp- purely physical! To prove that they have more things in common than the old in-out they...well Maggie decides they should re frame from any bed time romps. Obviously this does not sit right with Joe. Who will win in this battle of the sexes.

The film is a comedy that was surprisingly bold for its time in its some-what frank talk about the subject the production code (which was still sadly very powerful) hated most- SEX. Lets be honest when I say frank I mean as frank as a movie could be for the time. It certainly explores the subject of the marriage bed way more than another film of its ilk Pillow Talk released the same year. The film also has a great deal of charm in a kitsch kind of way. Its clearly not a deep film nor does it try to be. Its a light fluffy comedy but make no mistake the film has a sharp wit and a clearly polished screenplay. In fact the writer Charles Lederer wrote such classic screenplays as His Girl Friday (1940) and Kiss of Death (1947) among others. While this is not nearly as good as the aforementioned it still shines and a good story and fun dialogue. Director George Marshall's job is made easy with the sparkling performance by Debbie Reynolds. Her smile lights up the screen and she has such an ease and grace in front of the camera. Equally good is Ford who balances tough guy, charm and humor. As always Ford makes his talents look incredible easy. Him and Reynolds have a nice on screen chemistry which is believable and they play off each other very well. As likable and well acted the film is I feel like its a bit predictable and on the dated side. I also couldn't help but feel it too be a bit tedious in places and considering the film is nearly two hours long it felt like it could have used a trim. Sure its got a solid screenplay and you couldn't find two better leads but its not what i`d call a timeless classic.

Ultimately It Started with a Kiss is an incredibly likable farce. Sure its not nearly the best film of the decade but its a fluffy light Hollywood fair, it doesn't try and challenge its audience and thats alright. Sometimes its nice to shut the old head off and watch something silly and admittedly dated. Ford and Reynolds are dynamite together and I found this a great watch overall.Warner Archives has provided a nice brand new transfer for this film and it looks great. Considering the film is now over fifty-years old it looks great. Colors are bright and not washed out. Film scratches and artifacts have been removed and I would wager the film has never looked so good. As always WA does a stunning job at bringing new life into their classic films. The sound is also great with a nice clean 2.0 mono track that shows off the legendary Jeff Alexander's music (Twilight Zone, Singing in the Rain) No features on this release.

If you are in the mood for a light funny and extremely well acted film It Started with a Kiss (1959) is a good choice. Once again Warner has provided for fans a nice looking film- classic film fans should add this to their collection!