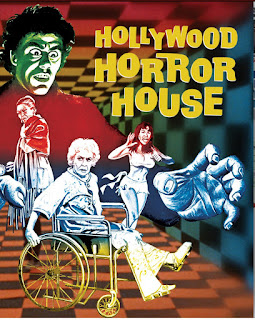 Miriam Hopkins had an incredible career which started in the late'20's just as talkies were coming in. She was nominated for an Oscar and starred in such iconic films as The Heiress (1949) and Dr. Jekyll and Mr Hyde (1931) often cited as the mile stone in Pre-Code Horror. Ms. Hopkins would return to her horror roots for her last film Hollywood Horror House. Hopkins is apart of a great tradition in horror called  Hagsploitation in which an aging Hollywood actress (sometimes actor) would re-invent their latter career doing horror or cheesy exploitation. An aging silent film actress named Katherine (Miriam Hopkins) lives in a decaying mansion with a few servants. When she is hurt she gets a younger man as a caregiver which sets off a deadly chain of events. I had never even heard of Hollywood Horror House and its one of those weird nasty little films I am so grateful for. But of course it has a fair share of issues. 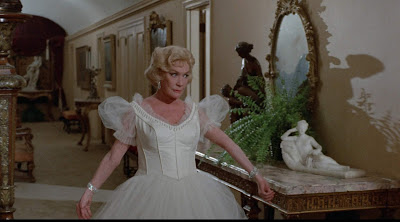 First lets talk about what I love about this film. Right off the bat I am a huge fan of classic films especially from the Golden Age of Hollywood so this movie seems tailored for me. I was already a big fan of Ms. Hopkins older films and seeing her play a crazy aging actress is a great fun. Some people think that this genre of horror was degrading to older actress's and low budget producers were merely taking advantage of their status. But i`d argue that Hollywood had used them up and these films were a way for them to not only make money but keep doing what they loved-acting. Hopkins is great in this film and seems to reveal in her role in Horror House. Clearly she is in on the campy joke. Which brings me to what else I enjoy about this movie, Wolfe clearly knows this is B-grade crap and he plays that up wonderfully. The mix of '70's psych-out trip and proto-slasher makes the film far more interesting than it deserves to be. I also thought its extreme low budget helped give the feel a wonderful broken down and gritty feel. Speaking of I thought the production values benefited greatly from its practical interiors which helps give it a touch of polish. But thankfully not too much. With that being said I also found the film to be a bit of a bore at times with some lull between the interesting scenes. Maybe the film could have done with a few scenes trimmed down for pacing sake. The story could have also been better with some holes in logic and some through lines that would have been worth exploring. I actually would have loved it if Hopkins played 'herself' adding a nice bit of meta humor to the mix. This meta self aware joke is sorely missing in this film which is wasted here. Overall I really liked this movie, despite some story and pacing issues its a film that doesn't take it self seriously and acts like a wild Sunset Blvd remake with a health dose of drugs and horrific murders on a ultra low budget.

Vinegar Syndrome is such an interesting label with what he releases and Hollywood Horror House is a further rare gem in their catalog. Standards are high with VS as they have been doing wonderful new 2k or in this case a 4k transfer. The film has a cool color palate and the new print really makes everything pop. The sound track is also great with a nice crisp clean 2.0 Mono. The extras include a wildly entertaining commentary track with industry legends David Del Valle and David DeCoteau. Both have a great chemistry together it makes for a joyous listen! Seriously this is great stuff. The extras also include a photo gallery.