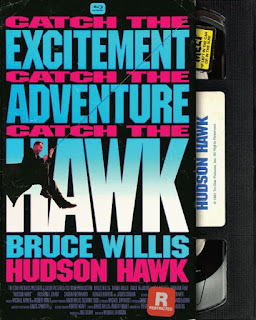 Remember a time when Bruce Willis gave a shit about acting and could carry not only an entire movie but movie franchise on his good looks and charm alone. Dont get me wrong I think he's talented as well...when hes not playing well Bruce Willis.  Hawk Hudson was made when his star was hotter than ever. But does this hawk fly? Surprisingly the film opens with a narration by William Conrad (in his last feature film credit) that recounts Leonardo Da Vinci (Stefano Molinari) and a rare artifact. Meanwhile in present day cat burglar Hudson Hawk (Bruce Willis) is just released from prison and wants to go legit. This doesnt last long as he is brought back into the game when he is strong armed into stealing the Da Vinci possession for the CIA and the mob. The very fate of the world hangs in the balance in this whacky action flick.

As mentioned above I was a bit taken back with the film starting with Da Vinci and a very humorous prologue. In one very funny scene a lady poses for Leonardo with messed up teeth, an obvious and clever sight gag to Mona Lisa. This sets up the tone which is carried throughout the film, which is very over-the-top almost to the level of cartoon like.Willis and director Lehmann seem to be having a lot of fun and the film almost feels like a satire Bruce Willis's earlier outings like Die Hard 1 and 2. Though panned by critics for it, I will say I didnt mind the films over-the-top tone and its pretty constant throughout. Having said that, some of the violence (though tame) is a bit jarring when its juxtaposed with this more lighthearted tone. Richard Grant and Sandra Bernhard give wildly silly performances that fit the films tone like a glove. Both actors chew every bit of scenery they find and while it does get cringe-worthy I feel like Grant and Bernhard somehow pull it off. I guess it also helps I adore both actors. Hawk is also filled with other great character actors include Danny Aiello, Frank Stallone, Andie McDowell and English legend Donald Burton playing a devilish bad guy.

So while I thought this was a enjoyable enough film it does have its share of issues. First off the film hasnt aged well with some dated pop culture references and mild homophobia which is always cringe worthy. I also found the plot a bit disjointed and had some holes. And even though I didnt mind the more whacky tone, I can see others that might find it a bit much. Overall even with its flaws I had a lot of fun with this film and it kind of plays up the action troupes but leans in on the camp. The film has a decent enough story and a great cast which helps gloss over its ridiculousness. And it is very much bonkers. Lehmann has gone onto a successful career on the small screen directing everything from Dexter, True Blood, Scream Queen and American Horror Story but is best remembered for the cult '80s film Heathers (1989). This isnt nearly as dark as that film but it is just as surreal and humorous.

Mill Creek Entertainment has re-released this in their Retro film line. First off like the others in this series it is housed in a fun slip cover which looks like a VHS box. Hawk Hudson looks great and was sourced from a good looking transfer. Colors are crisp and clear and small details in the rich production design really pop. The sound is great also with a healthy 2.0 Mono sound track. Overall this was a fun but very crazy action comedy and has shades of Terry Gilliam. Worth picking up.
Posted by The Video Attic at 9:18 AM