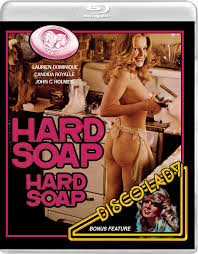 Director Bob Chinn blends '70's sitcom and soap opera troupes and adult hardcore in this weird hybrid Hard Soap, Hard Soap. Penny (Laurien Dominique) and her best friend are two typical housewives that are shall we say feeling not very fulfilled in the marriage bed? What starts as a chance encounter with a milk man leads Penny and her friend to help their fellow man by helping them with their sexual issues. And they just might solve their own as well. 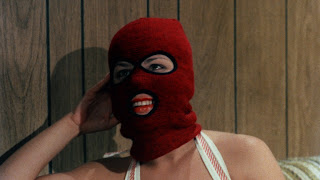 This movie is probably best remembered for co-starring the legendary John Holmes who was a porn superstar known for his big...well, member. He was also pretty infamous for being connected with the Wonderland murders. Sadly Holmes died at only 43 but his fame as the first household male porn star lives on. As stated above the film is a satire of cheesy '70's comedies and soap opera's at the time and the aim is for a more humorous tone. However its not taken over-the-top enough to 'drive' the point home. Amusing? Yes but probably for all the wrong reasons. Chinn would have been wise to really lean in on the farcical aspects of the plot. Maybe worst yet is for a light tone the film has some pretty mean spirited things going on- mainly a janitor that brutally rapes Penny but then, like in most "fantasies" of this sort, ends up enjoying it. Worst yet she feels guilty afterwards. It also feels like it goes out of their way to be homophobic which was, sadly, at this time still being treated with electrode shock therapy. The film's highlight is defiantly John Holmes who was still in his prime in this film. I did enjoy when Soap goes full out surreal, which is so out of place but at least kept things interesting enough.

I can see where Bob Chinn was trying to go with this film. But its light-tone is de-railed by rape, trans and homophobia and playing off mental illness for cheap laughs. Yes, its an adult film and nobody expects for exactly brilliant story telling but believe it or not there are some adult fare with decent even down right good story lines. This is not one of them.

The film is restored in 2k and per the opening title card Vinegar Syndrome utilized the best elements with the materials that could be located. I think the print looks great and with all artifacts and scratches removed. Colors pop and skin tones look natural. Sound wise the film sports a crisp clean 2.0 dts Mono track. Features wise the film sports a pretty interesting interview with director Bob Chinn that is worth a watch. The film also includes a bonus Standard HD film Disco Lady (1978) This makes for a great vaule if late '70's adult films are your thing.