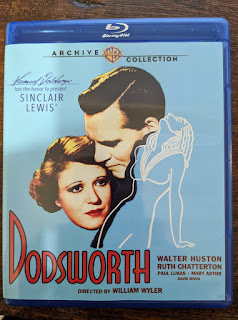 William Wyler had one three Oscars and directed classics like Ben-Hur (1959), Roman Holiday (1953) and The Best Years of his Life (1946) often considered his best. But if I were to list his classic films it would take up this entire review. Needless to say I am a huge fan of his work which spanned from the late '20's through the '60's. Warner Archives has released a stunning new HD release of Dodsworth (1936) a sorely over looked classic from the '30's. Based on the novel and stage play the film tells the story of Sam Dodsworth (Walter Huston) a successful auto-manufacturer who finally decides to retire and enjoy some rest and relaxation. His pampered wife Fran (Ruth Chatterton) talks him into a European trip, which she says will be good for him. Instead of using this trip to re-connect Fran uses their romantic getaway to flirt with other men. Sam is heartbroken when she decides to stay behind in Europe to have various flings and really live life. Her husband is desperate to keep the two from drifting apart despite this. Can they save their marriage? Even though the '20's may have been the building blocks of cinema I think the art of story telling really matured in the latter half of the '30's and Dodsworth is a prime example.

I was pretty amazed that the film explores a topic that was not discussed very often, namely a woman not only coming to terms with her life, marriage and old age but also going through what we would call today a midlife crisis. I honestly was not expecting a film from this era to explore such topics and done with a great deal of depth and maturity. It must have also butted a few heads over at the newly enforced Production Code as it deals with taboo at the time subject matter and indeed Fran leaves her marriage and is somehow left unpunished unlike other films of its ilk. The idea of Fran ever having sex with any of her gentlemen 'friends' is never made overtly clearly however its easy to read the subtext for ourselves. The screenplay sings with great dialogue, sophistication and a level of pathos unmatched in a lot of films at the film. Sidney Howard probably best remembered for writing Gone with the Wind in 1939 (with a host of uncredited writers) and Dodsworth feels like a glimpse into his talent for this kind of material. The other stand out is the cinematographer Rudolph Mate known for his DP work on classics like Gilda (1946), The Passion of the Joan of Arch (1928) and Alfred Hithcock's Foreign Correspondents (1940).  Wyler and Rudolph sets up some absolutely wonderful set pieces dripping with beauty and passion. The solid screenplay and photography is anchored by some stand-out performances by Huston, Chatterton and the legendary Mary Astor (who at the time was going through a high profile divorce). Character actors David Niven and Maria Ouspenskaya probably best known for her role as Maleva in The Wolf Man (1941) also shine.  While the film works overall I think my one major complaint is how the character of Fran is written. Clearly she is the hateful shrew in this story but I had hoped that Wyler and screenwriter Sidney Howard could have made her more complex. This it seems is a big ask because even today screenwriters have a hard time fleshing out three-dimensional women characters of this sort. Overall this is a great film and one that you can easily get sucked into and instantly get transported in its settings, characters etc. If you are a fan of classic movies, this one is very much worth watching.

I often say how amazing Warner Archives films look. And its true, they really take the time to make their old films sparkle and pop on HD. Having said all that they still manage to out do themselves and Dodsworth is simply INCREDIBLE looking. Per the back cover:

Restored in 2019 by The Academy of Motion Picture Arts & Sciences Film Archive and The Film Foundation in association with Samuel Goldwyn Jr. Family Trust . Restoration funding provided by the George Lucas Family Foundation.

Clearly a lot of hard work and resources have gone into this transfer and the gorgeous cinematography and it highlights Mate's moody work. Its safe to say this film has never looked better and probably never will or at least any time soon. Little details and the rich production value come into crystal clear. The sound is also great with a clear and healthy 2.0 Mono track. The features include the Lux Radio Theater production dated 4/12/1937.

For lovers of classic film and those wanting to devour more, this is a MUST own. Not only is the film a top notch example of a insanely talented director but so much as gone into making it look and sound as great as possible. This easily should make everyone's best classic release of 2020.