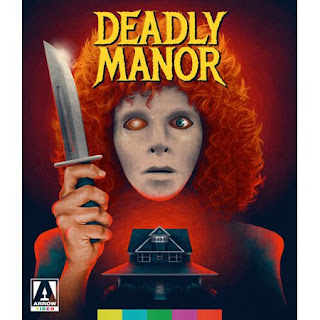 Arrow has been crushing it with re-releasing the films of Spanish horror director Jose Larraz. Last year they released three films of his in a box set and this year they have already released two more films. Deadly Manor is the second to be released this year. The film starts out with a group of care free teens on a camping trip. After they get a flat they decide to find shelter at a creepy mansion and I think you can guess what happens from there. Or do you? 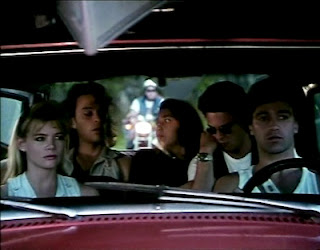 Deadly Manor starts out as a road map of horror movie cliches. Young attractive teens? Check. Attractive teens have road trouble? Check. Teens find spooky mansion and decide to stay Check and double check. Jose despite all the cliches and troupes attempts at something interesting but much like Edge of the Axe feels bogged down. This brings me to the what I feel nearly sinks the film, which is its pacing. Larraz really takes his time and weirdly lets scenes not vital to the plot drag on way longer than they should. This is frustrating as Manor really does set up an interesting mystery while also dipping its audience into a nice Gothic-Noir world. The "twist" ending sadly doesn't feel earned as we get no real clues or hints giving it zero impact. This actually feels a lot like an overly long episode of Tales from The Crypt minus the polished writing. The acting is also pretty questionable. As far as gore goes the film is alright. Again none of the death scenes are that stand out and i`d even say Axe was better in that department. What I adore about this film is its style which really has shades of Bava and Argento, with its use to lighting cues and nicely placed camera angles. I guess it seems i'm being harsh on this and the previous film I reviewed Edge of the Axe but both films feel like they dont quite hold up to Larraz's earlier more interesting works. I will say that Manor is the better of the two films and seems to stay truer to the directors roots within the horror genre. Its just hard to get around the pacing which is pretty daunting at times. It de-rails what might have been a pretty interesting subversion of the teen-slasher sub genre. 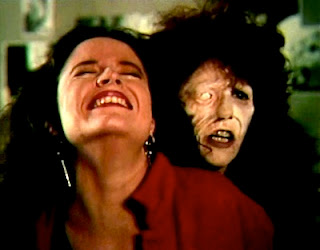 Arrow has provided another stellar release after languishing in video obscurity for over two decades. Visually the film looks great in a pristine 2k 1080p presentation. Face tones look natural and colors and Larraz's very interesting style is highlighted by this new transfer. Viewing a an old VHS you can barely see whats going on in night time scenes however this is certainly not the case with this brand new release. Audio wise is also great with a nice crisp clear 2.0 DTS Uncompressed Mono track.

As always Arrow provides fun new extra's which includes: A vintage interview with director Jose Larraz giving us some nice insight into the film. This is really great seeing how interviews with this director are rather rare. And speaking of interviews we get two newly commissioned interviews. The first with actress Jennifer Delora and the other with producer Brian-Smedley-Aston. Both interviews are fun and interesting and gives you some great context behind the making of this early '90's horror outing. I am very happy we got a colorful and very informative commentary with Kat Ellinger and Samm Deighan. Both have done other commentaries and not only do they really know their subject but its so entertaining to listen to. Rounding out the features is a enjoyable vintage trailer under the re-released title Savage Lust and an image gallery.  Its also worth noting the amazing new artwork done by Adam Rabalais and the booklet with an essay by author John Martin included with the first pressing.