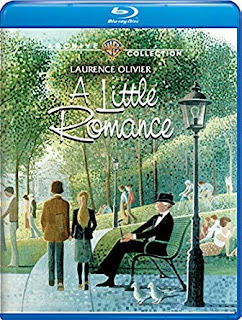 Diane Lane was only fourteen years old when she made her screen debut in George Roy Hill's A Little Romance (1979). She has gone onto be nominated for an Oscar and has been working steadily for over four decades. Lauren (Diane Lane) is a spirited American teenager living in France while her mother shots a film. She meets a french film lover named Daniel (Thelonious Bernard) and the pair quickly fall in love and begin a whirlwind romance. The quirky Julius (Laurence Oliver) aids them in their journey. On paper this seems like the kind of movie I dont think I would gravitate towards. However I am happy I gave this a chance.

Oscar winning director George Roy Hill brings his typical attention to detail, polish and charm to this film. Hill is known mostly for manly films like Slap-Shot (1977) and Butch Cassidy and the Sundance Kid (1969) however here he brings a touching humanity to this film. Romance is chocked full of charm and snappy wit which makes it incredibly engaging. The story is also anchored by some very relatable characters and situations. For example both teens come from less than stellar home lives and they find stability they crave from each other and Julius a kind of grandfather figure. Seeing how the film takes place in both France and Italy the cinematographer Pierre-William Glenn does an outstanding job photography the picturesque locals. I had my eyes all ready to roll as a lot of these films go over board with the sentiment but thankfully thats not the case. Hill despite all odds manages to reign things in and its not overly sappy but also reviles in its teen-romance while adding smart humor and of course amazing performances. Speaking of which Lane, Bernard and Oliver all shine in this film and the three all work well off of each other. I wasnt sure if I would like A Little Romance but I am a fan of George Roy Hill so I figured i`d take a chance. I am happy I did as the film is a light teen-romance adventure with an international flare and a great cast.

Warner Archives 2k restoration of this film looks great. The on location photography really looks stunning with this brand new print. Faces look natural and nothing looks over blown or washed out. Once again WA has given some love and care with this transfer. The sound is also great sporting a robust 2.0 Mono soundtrack. No features are included. Overall this is a fun movie and it looks and sounds great. Worth picking up!