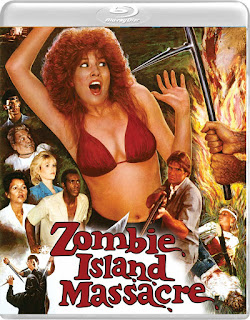 With a title like Zombie Island Massacre you know exactly what you are in for. Or do you? A group of tourists are enjoying a vacation on a remote island. After they witness a voodoo ritual they soon start turning up dead. Now they escape into an empty house in order to survive whoever or whatever is stalking them in the night. John N. Carter directed only one movie at the height of the slasher craze but what struck me is its not a typical body-count film. Instead of all white teens the bulk of the cast is middle to pushing senior and we actually get at least some diversity into the mix. It also takes the usual camp/outdoors setting for a tropical island. Even though it subverts the slasher genre it also falls into its familiar trapping. If you get a Friday the 13th vibe from the score that's thanks composer Harry Manfredini who did the music for the original Friday film and a bulk of its sequels. It further blurs this weird line of voodoo island romp and old school '80's slice`em up.
The cast is oddly fairly large and pretty standard for this type of movie and the acting is about what you might expect as well. Carter never misses a chance to flesh plenty of naked female flesh. Speaking of, if your expecting flesh munching you might be disappointing as the title is um...shall we say misleading. 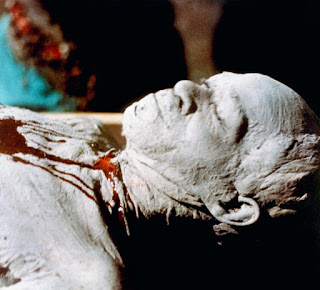 I think this is what both fascinated and frustrated me about Zombie Island - it sort of doesn't play by the rules by switching up the slasher genre but it also is a hallow experience with generic troupes already done to death by this time. I kept waiting for it to go full balls-to-the-wall insane but it felt weirdly toned down. Despite its flaws I couldn't but be interested in a so bad its enjoyable quality and the gore is decent enough to keep it entertaining. It also has a plot twist which, although it comes out of nowhere and feels unearned I still have to give the film props for trying to mix things up.

For better or worse Zombie Island Massacre wasn't exactly what I thought it was going to be, but I still enjoyed it even though its kind of a steaming pile.  Vinegar Syndrome produced a wonderful Blu Ray of this rare '80's film. The picture is incredibly good looking and was sourced from the original 35mm print. The result is a eye popping 2k remaster .To give you some idea just how good it looks compare it to the 13 minute "sizzle reel" which is an extra included. This was an unrestored footage and when you look at the feature film you can see just the kind of amazing work they do at Vinegar Syndrome. The soundtrack is nice with a crisp clean 2.0 Mono track. The extras include the 13 minute sizzle reel I mentioned above, tv spots and a original trailer as well as reversible artwork. I love these weird little gems Vinegar Syndrome treats us genre fans with.