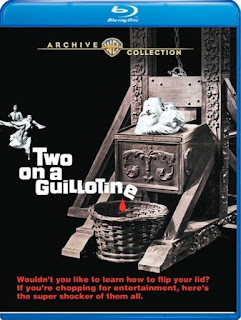 William Conrad is probably best remembered for his work as an actor, having played the titular character of Jake in Jake and the Fatman as well as Frank Cannon in the show Cannon. He was even leaded his voice for Dudley Do Right on Rocky and Bullwinkle -talk about a varied career. Besides acting he actually had over thirty directing credits, including this low budget Neo-Gothic outing. Cassie (Connie Stevens) is the daughter of a famous magician known for his macabre tricks. Her Mother, an actress with the show mysterious ran off with her whereabouts unknown. This left the young Cassie to stay with her Aunt. She would soon return when her father passes away, with an ominous last message that he would return from the grave. At the will reading she learns that she has inherited the entire estate at the tune of three-hundred thousand dollars. But of course there is a proviso that she spend seven days in the family’s creepy mansion. Now along with a reporter friend she must figure out if what is haunting her house is supernatural or someone after her fortune.

Despite a garish title like Two on a Guillotine this film is sooo Dull! At nearly two hours the pacing is glacier level and I found myself checking the time on several occasions. This is such a shame because the first act sets up a promising premise, and I love these old mansion/ will reading, possibly supernatural, more likely criminal kinds of movies. But this soon falls apart when the second act is largely uninteresting and doesn’t give us clues to what’s actually driving the plot and the end. An ill-advised love story is thrown into the mix which only further slows the film down. For the first hour nothing note worthy really happens. In fact, Guillotine feels like it would have worked much better as a Twilight Zone episode or a short film rather than a feature length film. I think worst of all, unlike the films of William Castle, Conrad forgets to just have fun with the film. What we are left with is a heavy-handed snooze fest, a tepid love story and fairly predictable finale. If you think I forgot to mention the horror, well its almost non existent which is sad because the title, the poster and the set up suggest something fair different than what we actually get. Conrad had up until this point only directed television and he seems woefully out of his depths. Considering some very bold and interesting movies were being made in the 60’s this movie feels like its from another era. Bland and boring. Warner Archives new print of looks great. The black and white photography is sharp and crystal crisp looking. Small details really pop and showcases the films great production design. The sound is also great with a healthy Mono 2.0 track. Dialogue comes out clear and shows off an underrated score by three time Oscar winning composer Max Steiner. No features are included on this release.