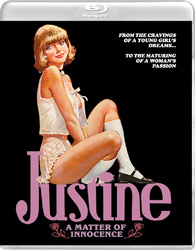 Roberta Findlay should be a name that EVERY cult horror and exploitation fan should know by heart. Her horror films include Prime Evil (1988), Tenement (1985) but before that she made adult films. Vinegar Syndrome has released one such film on stunning HD.  So, um. I have never reviewed an adult film before in my entire writing career. Its not that I look down on the genre but um, they dont exactly have compelling stories and visuals especially for someone who, if your like me is gay and straight porn has very little appeal. But Vinegar Syndrome was great enough to send me Justine and I figured lets give this a world. With an open mind I popped in the movie.

Justine is the touching story of a legal aged school girl and soon to be heiress who for the first time is discovering all about life and love. lots of dirty filthy double penetration love. Justine soon goes from innocent virgin to knowing the ways of sex between both men and women.I find it pretty interesting this film was directed by a woman and Findlay is one of the few female pornographers in the age of XXX films. Does this movie add an interesting female perspective on adult films? Well I find it refreshing that, as the title suggests the film allows Justine to take center stage. The thing I found odd was the full on rape scenes -which seems like the very opposite of what you`d expect a woman to want in an adult film. It also straddles a weird line of young school girl fantasy that is acceptable because she's of legal age. Fans of adult films will be pleased with the nearly nonstop sex squeezed within the films perky eighty-four minute run time. Adult film buffs will also be pleased that the erotic scenes are thankfully pretty varied so there is never a dull moment if this is your bag. Again I didnt find it sexy as heterosexual sex doesn't excite me and also I think growing up with Internet access has made me terrible jaded when it comes to this kind of film. Non fans this movie is frankly just Meh, had it been over-the-top or really leaned in on the perversion it might have been a fun watch. I guess these movies still sell well is because of the retro and charm that vintage porn brings but its really hard for me to see the appeal. But clearly this movie was made in a different time and I am also very much not its target demo. Whatever I may think about it Vinegar Syndrome provides smut fans with a very nice Blu Ray and the new 2k restoration looks great. When compared to the non restored trailer you can see just how good this new print looks. The moans and screams are crystal clear with a nice HD audio master. VS provides a brand new commentary with Findlay herself and its wildly entertaining. She talks about the film and also about her career with the help of film historian Casey Scott. This alone is worth buying the movie as im a huge fan of her horror and cult films and im always interesting in hearing her talk about her career.


For fans of Findlay and adult films this is a good way to kick off the Nude year.