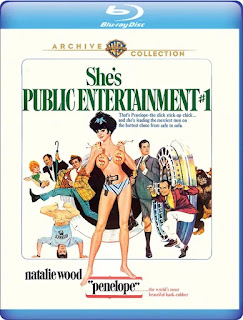 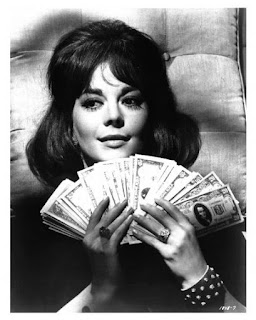 Natalie Wood was a star that sadly burned bright and was snuffed out well before her time. Thanks for Warner Archives we get a newly restored classic film from the swinging '60's. Penelope (Natalie Wood) is a bored housewife that is in therapy when she casually mentions that she just got back from robbing her husbands bank of sixty thousand dollars in this screwball farce by Arthur Hill (Lovestory).

So, lets get one thing out of the way- this movie has some rather, shall we say problems with its gender politics, especially in the wake of Me Too and Times Up. An early see, sees Wood's character being forcibly stripped by a wild beastly Jonathan Winters then chased around. Basically he sexually assaulted her and its laughed for laughs. Very cringe inducing indeed. Thankfully the film tones this down alot, making the scene with Winters all the more jarring and random. Part of me found the film charming for its overtly silly tone which isnt quite slapstick but defiantly is so wonderfully over-the-top. It also is bitter sweet seeing how natural Wood is in front of the camera. She brings the titular character alive with a lot of spark and playfulness. This is basically a bit of fluffy cinematic junk food. But like junk food it may be good at times but its empty where it counts. Most of the characters arent that interesting and the story isnt super compelling if im being honest. The film ups around in time, exploring flashbacks that dont add much to the current story which is underdeveloped and lacking. It also is terribly dated as it over uses the '60s back drop but also it has a much older, almost 40s screwball comedy vibe yet updated for the time. Overall fun enough but not terribly memorable despite Woods dazzling performance.

This is a very bright and colorful movie and the new 4k restorations not only makes the images pop but showcases Oscar winning cinematographer Harry Stradling Sr.'s work. The audio is a crisp 2.0 and dialogue clear. The film doesnt have any features. Even though I was lukewarm on this film the release is great if you are needing to upgrade this movie.