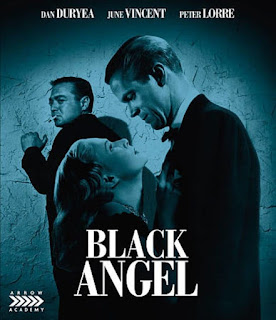 Black Angel opens with an impressive camera shot that establishes on a apt building then swoops up and into the window. Its really a masterful piece of cinema and thus opens up a sadly neglected Noir at the height of the genre. Club singer Mavis Marlowe (Constance Dowling) is found murdered in her upscale apartment. Kirk Bennett (John Philips) who was having an affair with Mavis and found the body is arrested for the crime. The slain wifes husband Martin Blair (Dan Duryea) and the wife Constance (June Vincent) of the accused team up to find the real killer lurking in the night.

In the dark and gritty world of Noir, Black Angel is a film that is good but sadly never gets talked about. But thankfully Arrow Academy hopes to change all that with their wonderfully restored Blu Ray. Roy William Neil is probably best remembered for directing a number of the Basil Rathbone/Sherlock Holmes movies. Neil helps elevates a B-Noir with some skilled camera work, tight direction and some clever twists that keep you glued. The cast includes some fine character actors like Dan Duryea, Wallace Ford and June Vincent. Vincent sadly died young and its a shame that she didnt become a bigger star as she shines in this film. As great as the cast is, its Lore who kills it as the heavy. Maybe its a safe casting choice but its great none the less. He effortlessly plays like a sleazy creep and he honestly steals every scene he is in. While the movie is entertaining it never reaches the heights of other Noirs that are more polished. The twists are good but on a bit predictable and I wish that Neil would have double downed on the films odd love affair and dirty grit of other films in the genre. I wish it had been a bit more nihilistic in its worldview. I also found myself bored at times which is never great especially for a movie thats only eighty-one minutes long. Overall fun but not nearly as good as it could have been. It felt like it played it a little too safe and lacked the perversion and bleakness of other Noir outings. 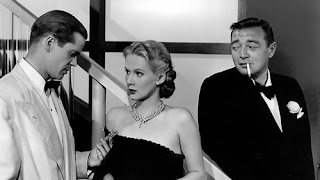 Arrow Academy has provided a stunning new 2k restoration that is incredibly sharp, crisp and removes any artifacts. It honestly looks like Criterion quality here. The sound is great with a nice 2.0 Mono soundtrack which really highlights Oscar nominated composer Frank Skinner's great score.  The extras are great. The main feature is an interesting interview Neil Sinyard film historian and author.  Mr. Sinyard gives some great context behind the film. It honestly made my second viewing even better. If you want further context behind this film you are in luck as you get a feature length commentary by historian Alan K Rode. Much like Sinyard, this is highly interesting and really helped me like this movie more on my second viewing. This commentary is worth taking the time to listen to. Rounding out the features is an original trailer and stills and promotional material. The other treat is a booklet with an essay by Philip Kemp, a low down on the cast and crew and some of the original reviews for the film. AA does an amazing job of highlighting worthy genre films in an in depth way. Noir fans or those new to the genre will find this a must add to their film collection.
Posted by The Video Attic at 8:15 AM