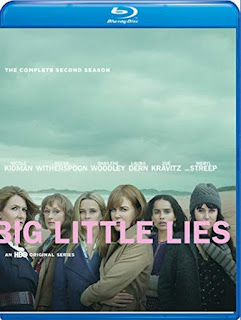 Unless you've been living under a rock you've no doubt have at least heard of HBO's sizzling comedy drama Big Little Lies which follows a group of powerful women and the series of events that spiral into a night none of them will soon forget. I'm being vague because the first season does an incredible job at presenting a harrowing crime and then working its way backwards, filling in all the who whats why's and where's. The creators and show writers are extremely clever in giving us just enough information to keep us hooked into seeing how it all unfolds. And the build up has a satisfying ending. And that really was suppose to be the end...as in the end of the series. However the show was insanely popular and it was decided to bring it back for a second season. Fans were even more excited to hear that not only is everybody from season one returning but they would be joined by the legendary multi-Oscar winner Meryl Streep.  Spoilers Ahead.... 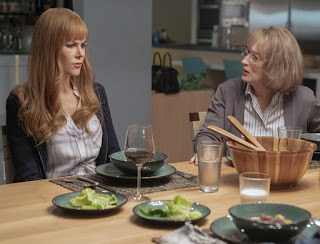 Big Little Lies Season Two picks up where season one ends with the death of Perry (Alexander Skarsgard) wife of Celeste (Nicole Kidman). Now the women are bound with a secret as Perry's Mother Mary Louise (Meryl Streep) enters the picture asking questions about his death. Its hard to believe that the first season was meant as a standalone as while it ties everything up it still felt like it had places to go and the show-runners delivered. Of course the cast is simply incredible and it feels like with Streep in the mix everyone is especially on their A-game. Much like season one the dialogue snaps crackles and pops of course brought to life by an amazing cast of actors. The great thing about both seasons is it truly is a ensemble piece. I thought it was smart bringing in a brand new character to mix things up and Steep's Mary Louise is genius. Her interaction with Kidman's Celeste going at it is pure television gold. Its so fun to hate her but wisely she brings a lot of pathos to the role so its not a one note villain. Shes complex. Some filler episodes abound and honestly the build up to the finale doesn't have that same punch as season one. Its still highly entertaining and it feels more like a fitting end to the series overall. I think the one thing that is impressive is how the writers mange to walk a fine line between being outrageous and crazy without getting too carried away. It really finds that brilliant sweet spot. HBO is rarely off with their shows and with a mesmerizing cast, great writing and production values this show is tailor made to indulge in this bitchy, harrowing and darkly funny at times guilty pleasure.

Honestly I`d love a third season but i`d also be OK with this as the ending. Either way Warner Archives has you covered with the Complete season season on Blu Ray. Picture wise BLL's looks incredible with colors that pop and skin tones looking natural. Having been sourced from  high def digital the outcome is stunning. Sound wise its also great with dialogue and score coming in clear. and we get a impressive HD Digital 5.1 track. Extras include: The Lies Reveled A Conversation with the cast of Big Little Lies.  Im a huge fan of this series and this is a great release. Worthy of owning especially if you are new to the series.