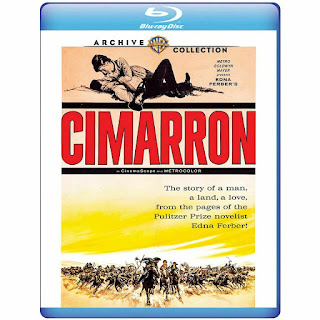 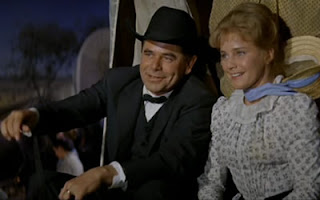 Not all remakes suck! Yes, be virtue they usually are inferior to their original counterparts, 1960's Cimarron remade from a 1931 film of the same name is a rare exception to the rule. Anthony Mann tells the epic story of a young couple as they fight to thrive in the newly settled Oklahoma in 1889. We witness the joys, the struggles to carve out a place in this new world that is both beautiful yet brutal and unforgiving. I'm not a huge western fan, but I do like Anthony Mann who I always thought was a sorely underrated director -I also love Glenn Ford so i thought i`d give it a chance. Color me pleasantly surprised. Cimarron was a film that was pretty much the last of its kind, a western when the genre was hanging on by a thread (and almost gone by the latter part of the decade) and a big budget Hollywood epic in the style of Gone with the Wind (1939), Cleopatra (1963) and Ben Hur  (1959). But actually it being a period drama keeps it from feeling dated and in fact the film is at times pretty brutal and frank, something you could never do in the early '30's. The film feels like there are real high stakes at play and you cant help but root for the main characters. It helps that the storytelling is compelling and utterly engrossing from start to finish. The acting is great and its one of those movies were big stars bring a lot of weight to their roles. Glenn Ford never disappoints and in Cimarron he gives one of his finest performances of his film career. Maria Schell and Anne Baxter also prove they can hold their own and like Ford turn in star worthy performances. And with all these movies, they are populated by great character actors such as Henry Morgan,  Russ Tamblyn, Vic Morrow and Royal Dano who acted in nearly two hundred films and television shows in his long career.  Cinematographer Robert Surtees won 3 Oscars in his prolific career and Cimarron is among his finest work in my opinion. The stark wide open scope and depth he brings to the film and how he shots the great wide and wild wilderness adds a layer and makes for the perfect backdrop to this epic remake. Then you have a score by Oscar winning composer Franz Waxman (Bride of Frankenstein, Sunset Blvd.) that ties this film together. I was really impressed with the depth in story telling, the epic scope and the mega talented in front of and behind the camera. Warner Archives provides a brand new transfer and it showcases the richness that Surtees brings. The colors really pop but aren't overly blown out. Skin tones are natural and small production details stand out. Waxmans score sounds great with the new healthy 2.0 Mono soundtrack. Stunning job all around with this release. Sadly no new features are included besides a trailer. A must own.