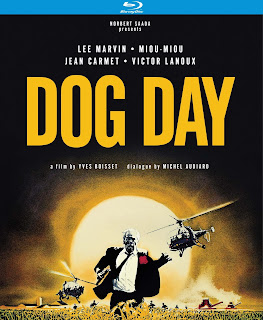 Jimmy Cob (Lee Marvin) is a fugitive on the run after scoring a huge bag of money. He sacks it away in the French countryside. As he hides out a remote farm he soon learns he is being hunted not only the police but a former colleague and a demented family that dwell on the land.  So, um yeah Dog Day is something. This film is a mess. Its a crime/man-on-the-run movie that at times veers wildly into a carnival of taboo and sexual depravity and even randomly turns into a slasher film over an hour into its disjointed run time. The plot and story is all over the place. Its very much like smashing two different films and trying to make them work. As I said above the film is highly sexual almost to the point of being a live action cartoon. All of this is so jarring not to mention everything feels wholly unfocused and frankly sloppy. 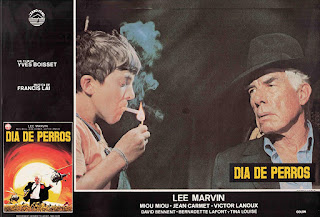 We the audience spend over ninety minutes with unwashed raving perverts which normally is not a bad thing but it feels so out of place here. Boisset is clearly out of his element with this film and he seems to have lost the reigns on what should have been a tense crime thriller. There are things in the screenplay that very nearly could have been clever or interesting but Yves never explores anything in depth. Dog Day is also very bleak at times. For example one of the very few  sympathetic character, an elderly woman, ends up hanging herself after making numerous suicide threats.  Maybe more disturbing is the casual way in which the director handles repeated sexual assaults.

Dog Day feels like if The Hills Have Eyes had been spliced with Prime Cut mixed with some over-sex John Waters movie (minus Waters trademark wit and satire).  I wanted to like this movie as it seemed like a high energy crime film with a favorite actor, Lee Marvin. What I got was a mis-mash of genres, nearly foaming out of the mouth country folk stereotypes which smacks of lazy writing. One thing I will say is, this film is never dull and has a quality of watching a train wreck.

Kino Classics for better or worse has released or rather unleashed this '80's oddity. The film itself looks great with a crisp clean picture with very little digital artifacts. Skin tones are nature looking and colors arent over blown or muddied.  The sound is also great and include both the English and French audio. The extras include a Trailer and Audio commentary by film Historian Howard S Berger and Steve Mitchell.