The World, The Flesh and the Devil (1959) Warner Archives

Ranald MacDougall is probably best remembered for writing the screenplay for films like Mildred Pierce (1945) and Cleopatra (1963) as well as an uncredited work on Alfred Hitchcocks Stage Fright (1950) but he also directed notable films like Queen Bee (1955) and the strange little film we are talking about today, The World, The Flesh and the Devil (1959). 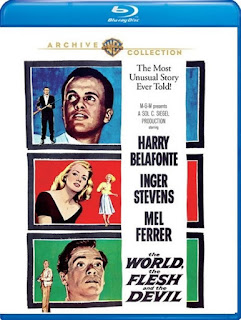 This one is a mixed bag. While I love a good character study World feels like a movie better suited as an episode of The Twilight Zone rather than a full feature film. At first the time is intriguing as it slowly builds and Belafonte carries the film for a solid thirty-ish minutes until we are introduced to the second of three characters in this film. Personally I dont mind a  slow build provided that it actually goes somewhere interesting and it feels like this film never gets there. Frankly I was more bored as the plot (of what there is) slowly unfolded at a glacier pace. End of the world films like this can explore a lot of subject matter and this seems to be the case-well almost. We are introduced nearly a half way in to Sarah (Inger Stevens) who it turns out also somehow survived. She is white and its suggested very upper class a juxtaposition to Ralph an African American working class guy. MacDougall plays with subjects like race and class but ditches this almost right away. Gloves have never been more kid friendly. Instead of challenging and interesting social commentary we get a sappy turned dark (seemingly out of nowhere) love triangle between Ralph, Sarah and another man named Benson (Mel Ferrer). And indeed this is, in a nut shell a romantic drama set in a post-apocalyptic future. Which is such a waste of the sub-genre which is merely used to put the characters in a more dramatic situation than doing something interesting. It also has this weird tonal problem, drama intermixed with some lighthearted moments. I assume this was to keep the film from being too bleak.

As hinted at above the plot turns much darker almost out of nowhere and isn't built up enough to feel earned. This is especially baffling given MacDougall other screen credits. The film actually starts going somewhere in the last ten minutes but its a case of too-little-too late for me. It baffles me how such a talented writer like MacDougall turn in a bland screenplay. Its a shame because there are good elements in here. Chiefly its lead. Harry Belafonte gives a great performance as the seemingly sole survivor. A scene that sticks out is when his character Ralph is listening to the last transmissions, describing Earths fate. The camera stays on a medium shot of his face and his emoting as he learns the life as he knew it, any probably everybody he loves is long gone. Its an harrowing moment. Belafonte is wasted on this material though. I had some high expectations for this film seeing how the writer/director has a pretty good track record, but wow this was pretty underwhelming. Besides a great performance by its lead and a good score by Oscar winner Mikolos Rozsa , The World, The Flesh and the Devil is a largely forgettable relic of a film from the Cold War era and would have been suited as a television episode rather than a full length film. It comes close to examining bold social issues but opts out entirely.


Warner Archives doesn't disappoint when providing a nice crisp clean restoration which looks great given its age. The disc feature any bonus material.