The Limit of Control (2009) Arrow Academy 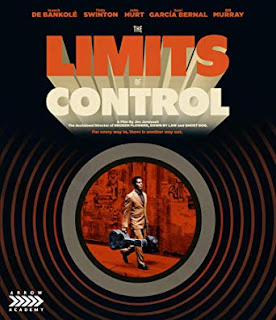 Jim Jarmusch is very polarizing figure in film making. Either you think he's one of the most interesting voices to emerge from the NY film scene in the early '80's or you think hes pretentious. I find myself in the former category but I know that his films can be an acquired taste. To celebrate its ten year anniversary Arrow Academy has re-released The Limits of Control on Blu Ray. We follow a mysterious unnamed man (Isaach De Bankole) on a strange odyssey as he conducts a criminal job in Spain. Jarmusch doesn't mind taking his time and sets up a dreamy, at times surreal film and while there is a criminal plot in here its pretty secondary to the journey and the characters our main character is involved with. Reinforcing this dream like quality is the repeated questions each new character asks the Lone Man.  For example each character always confirms that he doesn't speak Spanish, then later in conversation asks if he is interested in..something, like film, music, science etc. Some of this I think is meant to be funny and Jarmusch is certainly known for his dry and sardonic sense of humor. 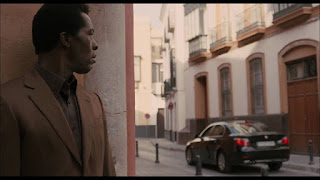 Like Tarantino, there is something just this really hip and cool vibe that doesn't feel like it tries too hard. It just comes with this ease which other film makers just seem to struggle with.
This was also the case with his vampire film Only Lovers Left Alive which ached with vivaciousness. It also goes without saying that his style is really top notch and what the movie lacks in plot it makes up for in visual perfection. I will say that you enjoying this movie all depends on your mileage with a slow burn of a film. Limits of Control is so slow at times its almost as if Jarmusch is testing its audiences patients while also indulging in his own excesses. For me I knew what I was getting so I didnt mind the pace because there was always something interesting either visually or sub textually or the parade of interesting characters that are weave in and out of this film to keep me glued. As I said your mileage for this will vary but for my money I found it almost hypnotizing at times. Dreamy, slow paced and feels like a neo-noir that never quite commits to the crime aspects, Limits of Control is not for everybody and I can see why some would be put off by the paper thin plot and slow pacing. However I found the movie to be more of a journey and not about the story per say which sounds like a cop out, I know. If you like artsy kind of intellectual films with a cool breeze running through its veins this movie is for you. Arrow Academy does a great job in providing a amazing transfer that shows off the captivating and evocative cinematographer of Christopher Doyles (In the Mood for Love). Images are crisp and clear and thankfully never feel washed out or grainy. We also get a nice Mono 2.0 and 5.1 track. Features include A video essay by author Geoff Andrew, The Rituals of Control a new video essay on the film by author and critic Amy Simmons and two vintage featurettes  exploring the film and its locations.The release also features a booklet with a new essay by Geoff Andrews.  This is a great release and should be considered a must buy for film lovers.