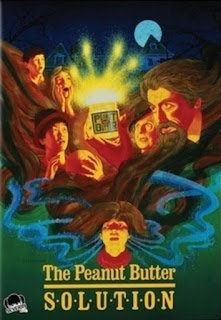 Michael (Mathew Mackay) is just a normal kid with a sister and a crazy painter dad until he wakes up one morning completely bald. The doctor says that something scared the lad so bad it made his hair fall out. He is no a total outcast at school and to make matters worse he starts be visited by the ghosts of two homeless people that buried to death in a horrible fire. They tell him that since he showed them kindness in the past that they would help cure his baldness. But it seems to work a little too well. What makes this so perfect is the fact that Peanut is so blissfully unaware of just how weird it is, especially considering it was aimed at children. It treats everything as totally normal even as we the audience go further down this rabbit hole. And this movie really is bonkers. Some of the weirdness includes but not : a creepy art teacher whose is sacked for being and doing shady stuff, two (and is possibly insane)  ghosts of a pair of homeless people who died in a horrible fire and of course the titular character going bald. Whew! Whats even more interesting is that Rubbo films some scenes like a straight up horror movie, especially when dealing with the supernatural element. The story itself isn't that incredible but, much like a car wreck its hard to take your eyes off of it. Just when you think that it couldnt get any stranger it just keeps ramping up the insanity. Without spoiling anything the finale is really something to behold. Lets just say stuff gets dark. 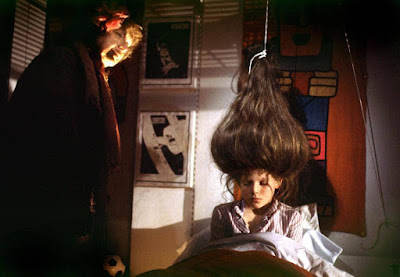 This is the first in the Severins Kids line. This is pretty great because a lot of us sleazy people have kids or in my case have nieces I want to scar for life someday. This is the perfect film to launch this new branch. The film itself looks great with a crisp clean 2k restoration. I've never seen this before but its hard to believe this film has ever looked better in its over thirty year life. Night and darkly lit scenes really benefit greatly. The sound is also great with a well balanced Mono 2.0 track. The Extras are above and beyond amazing! For starters this includes two cuts of (The Us Extended Cut) which is a nice addition. Then we get a directors commentary with Rubbo giving some interesting insights into this wonderfully weird movie. We also are treated to three interview featurettes with producer Rock Demers, Siluck Saysanasy (Conrad in the film) and Paul Corupe. Rounding out the features is a US and Canadian trailer. Bottom line: this is a fun weird and wonderful film and an amazing start to Severin Kids. I`d even put this on the short list as the best release of 2019 and thats saying something, because its been a great year for releases.