Indian Jones this is Not: Jake Speed (1986) Arrow Films Review 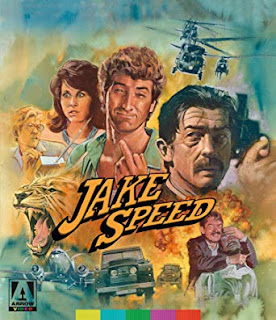 In an alternative Universe pulp fiction characters are actually real. One such person is Jake Speed. When a woman is kidnapped his services are obtained. This movie is a giant mess, so lets just dive right in. Things in this movie never add up. Like the fact that pulp characters are all based on real people sounds interesting on paper yet that idea but is never fully explored or really explained. Despite this Lane REALLY doubles down on its one-meta joke. Seriously, its so over used it becomes grating. I think what disappoints me the most is Jake Speed never subverts troupes yet, as you might expect gives us a bone-head over-macho ‘adventurer’ that plays more like a cheap dime store copy of Indiana Jones which it not so subtly referenced. Thus, the film struggles to find its own voice. Then you have the stuff that has aged horrible. For example, gender politics are as cringe inducing as you might expect not to mention it really leans in on its damsel in distress motif for all its worth. But wait, the director gives us a helping over overt homophobia for good measure. In one scene Karen hurls some rather ugly hate speech in order to call into question our manly heroes’ sexuality. It’s so utterly needless and further smacks of lazy writing.  Instead of giving us a cliched Jones type it would have awesome if Speed was played by someone nerdy like Dennis Christopher. Or hell, even have a woman as Jake Speed with the in-world explanation that she was written to be a man. Not only would this have been a clever twist but some commentary on sexism. 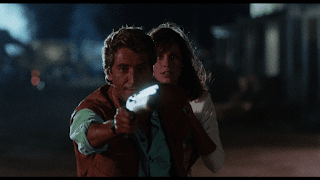 But Andrew Lane isn’t interested in anything outside of the box and this film is as by-the-numbers as it gets. Also, the film also weirdly takes its sweet time in unfolding the plot. It spends far too much take on set up and less about pacing or fixing its plot holes. Wayne Crawford plays the titular Jake Speed but this too is a problem. Crawford isn’t terrible as an actor but he really lacks the kind of big screen adventurer charisma needed to pull the role off. Hell, even Brent Huff from Gwendoline (1984) would have been a better choice. The one highlight is Dennis Christopher who is a favorite character actor of mine and I feel sorry he had to play second banana given his talent. And least we not forget John Hurt who gives a deliciously great performance, far better than this film deserves. New World clearly wanted to cash in on the Indiana Jones films and what we are left with feels like a poor knock-off rather than a fun standalone adventure film. Overly simplistic and not at all fun.

Arrow Films provides a nice clean 2k restoration for those you of that find this movie entertaining. The sound is also well done with a clear 2.0 Mono track that provides good depth in sound. Extras include a new interview with director Andrew Lane as well as producer William Fay. Also features a essay by Mark Cunliffe who seems to paint this movie in a much more positive light. Overall a great release of a dud of a movie.