One of the first releases from Severin was Gwendoline aka The Perils of Gwendoline in the Land of the Yik-Yak (1984) so it seems fitting that, as the label hits its stride it re-releases the one that started it all. 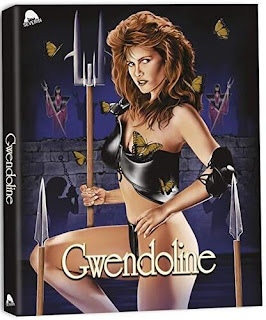 I know Gwendoline has a firm cult following among cult fans and hardcore 80's lovers no doubt highly regard this as well. I on the other hand thought it was....alright. Gwendoline (Tawney Kitaen) is on the search for her missing father, who it seems was after a rare specice of butterfly. This search leads her to meet a rough rogue named Willard (Brent Huff) and a trip into the Yik-Yak. Leather and fighting ensues in this adult adventure flick.

The film wastes zero time in grabbing ones attention and after a great introduction of our main character Gwendoline (played by 80's sex pot Tawney Kitaen) in a shipping crate, things seem to be off to a great start. But then starts to dip in energy feeling more like a so-so Indiana Jones re-hash injected with some nudity for good measure. And that's the thing about this movie its kind of Meh for the first hour. It mostly feels like typical adventure troupes geared towards a mature audience and is woefully predictable. The gruff hero falling for the girl is so played out even by '84 and I just wish the could have played with troupes and actively subverted them. The filmmakers dont ever push anything far enough to be memorable. I also cant help but think this movie tries to coast a lot on the star power of Brent Huff and more specifically Tawney Kitaen. Its not to say they are bad by any means -in fact both actors are fun to watch together, just that the first half of the movie are spent with their characters and they arent exactly the most likable. 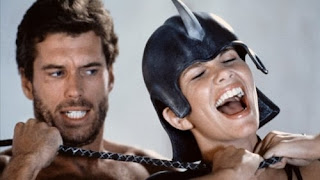 That is until an hour into the run time. That is when we get a full blown surrealist film that feels very much like Terry Gilliam.  For me this is when the film truly shines but is also kind of jarring as it feels so different from what came before it. I just wish the film didnt take so long in getting to the more fun and memorable aspects. I really think that maybe if I had seen this movie a lot younger I would have at least some nostalgia goggles, thus forgiving some of the less than stellar plot, that really lacks a lot of world building. Say what you will about Hell Comes to Frogtown (1988) but at least its consistent in its hyper surreal world. If Romancing the Stone (1984) was Indiana Jones for the Rom-Com set, Gwendoline is Jones for the horny crowd.

As I said above this is a special title for Severin as its one of the very first to be released by the label. But that was DVD and now we have STUNNING 4K Blu Ray so it seems fitting that this film finally gets a re-release. The picture is an improvement and looks sharp, clean and looks great for a movie over thirty years old. The old commentary with the director is ported over (as well as the other extras) and includes a fun new commentary that re-units Brent Huff and Tawney Kitaen. For fans this is a great addition. A new interview conducted in 2019 with director Just Jaceckin as well as the one he did in 2006. The extras are a wealth of interviews that tackle different aspects of this cult film. In fact, after viewing them it gave me a new perspective on what the filmmakers were trying to achieve.  The release also includes a SECOND cut of the film, which is the shorter US release of the film. This cuts 16 minutes off the films original runtime. Its nice to have that included as well just for those die hard fans out there. Overall this is of case of an AMAZING release for a film that was just alright. It has a big following so what do I know?