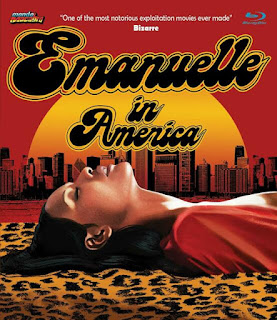 Emanuelle was a landmark sexually charged film directed by Just Jaeckin released in France in 1974 in response to films like Last Tango in Paris (1972).  It was a hit and was spawned a other films as well as a new series the 'Black Emanuelle films'. Sleaze king Joe D' Amato  directed the first in this hugely popular series starring Laurua Gemser as the titular character. So I must admit I am totally new to any of the Emanuelle films despite them having a notoriety among the Grindhouse circle. Emanuelle (Laura Gemser) is a photographer always looking for an interesting story. She goes on a series of erotic adventures on her quest including a harem and a brothel made up of male studs servicing rich women. The Emanuelle movies and others like it kind of exist as a weird relic in a way. Watching the hardcore scenes intermixed within the films flimsy (at best) plot, I had to keep reminding myself that, in a pre Internet age seeing this kind of steamy action was bold and maybe even a little shocking. I guess as a someone who grew up in an age where this sort of stuff was so easily available its not very shocking though some might consider it pretty erotic. So, having said that the fans of EIA and other films like it are more interested in its sleaze and camp value, and 42nd street nostalgia. I mean I dont think anybody going into this movie would suggest it has an amazing story, though frankly its not terrible either.Plot wise it seems like a trio of vignettes rather than one over arching narrative and thankfully D'Amato has a certain tongue in cheek approach which helps keep it fun.  EIA also carries with it a reputation for pushing boundaries which is evident during a brief scene, that involves ill just say a woman and a horse. Though while this scene is never topped in terms of shock value (besides maybe the 'snuff film within a film, more on that later)the film is of course over flowing with wildly sex and hardcore acts. Again maybe I'm jaded but its just alright. For me it never really pushes its taboo subject matter far enough to be truly edgy or entertaining . Having said that I will say the phony 'snuff film' within the film was interesting, harrowing and seemed to hearken back to '70's cannibal films or doc-u-films like the Mondo series. Its actually manages to be unnerving especially as the effects are well done (helped a lot but the grainy scratchy film quality of film within the film). Emanuelle in America is certainly a film that is a product of its time and therefore its not going to appeal to a lot of younger viewers like myself. After all the Internet generation could and can see all this kind of action and more 24/7 on demand. It also has some half hearted social messages dating the film even more. Probably best enjoyed for its sleaze and kitsch value. A total of five films were made in the Black Emanuelle series and this is the one that kicked it off. 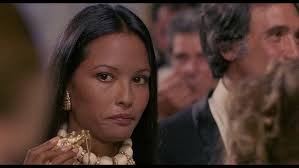 Mondo Macabro rolls out the royal treatment for such a groundbreaking film. The print is an eye popping visually pleasing 4k restoration. A lot of love and care was clearly put into making this print look as best it ever has. No grain and skin tones have a nice natural balanced look. The sound is also well done with a nice 2.0 mono which is crisp and clear with the dialogue (such as it is). Mondo also provides not one but two audio commentaries. The first is director Joe D'Amato who has some great insights into his notorious opus. The second is from filmmaker and film scholar Bruce Holecheck and Nathaniel Thompson. Both provide a very enlightening and entertaining commentary. Mondo may not do big showy 'event titles' but damned if they dont release some bold and daring films from virtually every part of the globe. Its this reason they remain my favorite and its always exciting to see what they are putting out. Emanuelle in America is a must own if you are a fan of grimy D'Amato and softcore romps.
Posted by The Video Attic at 11:57 AM