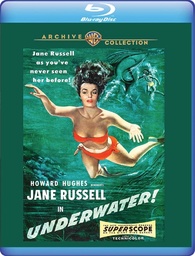 The poster for Underwater from 1955 is sex-sells 101 using the lovely and talented Jane Russell to sell this sea-adventure, with her not so sunken chest on full display. But is this movie just an excuse to see Ms. Russell in all her bathing glory? Two deep sea divers accidentally discover treasure while on a routine dive. Now joined by Father Cannon (Robert Keith),Theresa (Jane Russell) and Gloria (Lori Nelson) they must fight off scavengers and other dangers in order to retrieve their big pay day.  Underwater is one of the last of its kind, a big ‘splashy’ adventure film which even in ’55 seemed like a fish out of water to more grounded counter culture films like Rebel Without a Cause and Blackboard Jungle or serious drama’s like East of Eden all released that same year. But that is a big part of the films charm. It doesn’t challenge its viewers like Treasure of the Sierra Madre (1948) but rather plays out like a Disney era adventure film but made by RKO instead and of course makes sure to show off its female leads. The pacing is a little uneven with the first act clipping away yet towards the second act things slow down a bit. Sturges feels he must inject some romance into the film which really doesn’t add anything in my opinion the story. In fact its these scenes that make the film free more dated, like something from the ‘40’s. Thankfully things pick up in the third act. 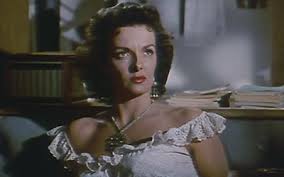 The cast itself is great with Gilbert Roland giving the film the male version of Russell. Roland brings sex appeal, machismo and swagger, bare chested and ready for action. Playing the second diver is Richard Egan who does a fine job acting wise but feels like he gets lost among his peers. But of course its Jane Russell with her looks and her curves that packed most people in the seats and Sturges makes the most of her talent. Not to be out done is Lori Nelson. Nelson no stranger to underwater adventures, best known for role in Revenge of the Creature also released in 1955.  The under-water scenes themselves are nicely done and really pop in Technicolor.  Going into this film I thought maybe it was a movie based around Ms. Russell in a bathing suit however while that’s not untrue the film does have some fun with its premise and I did find it at times engaging. What ‘sinks’ this film is uneven second act and some side plots that stop the film in its watery tracks. And that’s the thing, a movie like this should be anything but boring. Overall its Not bad mostly forgettable especially when you look at all the other classic films released the same year. Warner Archives starts the New Year off right with its release of Underwater with an eye-popping 4K restoration that takes full advantage of its colorful sets. Everything looks crisp and clean and any artifacts have been scrubbed leaving a nice print. The darker under-water scenes really benefit from this new transfer as I imagine older prints would have been hard to see in places. The audio is great as well and what we get is clear sounding audio and showcases the lovely score by legendary composer of films like Out of the Past, Hathcock’s Notorious just to name a few. No special features included.