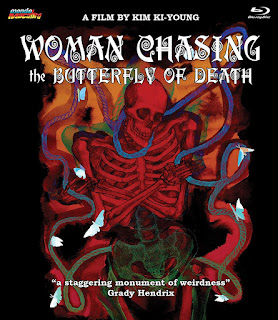 For the adventurous cinema lover, branching out into world cinema is a great way to discover the interesting, thought-provoking and in the case with the film I’m going to be talking about, the downright insane. Released by Mondo Macabro the leading label for international genre fare comes Woman Chasing the Butterfly of Death by Korean director Ki-young Kim.

On a trip with some friends, a young student meets a mysterious woman with a butterfly necklace. She offers the student a drink and after he consumes it the woman tells him she poisoned them both, not wanting to die alone. Thankfully he survives but the woman does not. Now stricken with depression the man decides to kill himself. Before doing so he is interrupted by a crazy book salesman who tries to convince him that the secret to cheating death is through sheer willpower. To make matters more bizarre the student comes in contact with the skeleton of a two-thousand-year-old woman which, naturally comes to life and demands a human liver. Things only get more bizarre as the young man goes down a rabbit hole of madness and death in this South Korean horror/fantasy. 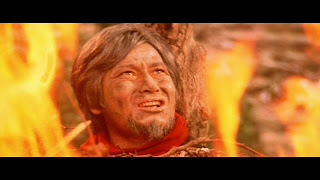 The Butterfly that Chases Death might be a challenging view for most people if they are not familiar with films from this region. The notion of straight-forward logic and common sense that we take for granted as a Western audience is bound to be warped given our different cultural perspective. Plot wise the film follows its own set of rules and as cliché as it sounds, the experience really does feels like a bizarre nightmare intertwined with a modern folk tale. Like any good folk tale, it tackles deeply rooted themes but in an otherworldly and fantastical way and of course, with a profound message at its core. As the film’s title suggests the over-arching theme and message of the film is death, those who fear it, those who embrace it, and others who try and overcome or outrun it. The filmmakers tie these elements into its extremely loose plot which feels more like a series of vignettes than a tight cohesive story. Despite this lack of traditional structure, Butterfly is engaging, even if only to see what insane set-piece is coming around the bend. For those who can handle a loose and at times downright baffling plot Woman Chasing the Butterfly of Death is quite a rewarding film that tackles a very human subject like our own mortality but in a strange and at times beauty way.  Due to Kim’s lack of budget the film can be at times hooky but I find it only adds to its overall charm.

Butterfly has been restored in gorgeous 2k using original film negatives. Considering this film is over forty years old and the elements were probably not treated the best, it’s a small miracle we are getting a print that looks this good. Colors are rich and vivid which is most evident in night scenes or scenes that were poorly lit. This high def print also means you can see the wires on some skeletons but I don’t think anyone was under the illusion they were really moving about on their own anyways. I’m always incredibly impressed when Mondo Macabro can not only rescue a film from almost total obscurity but managed to track down and interview people from the production. In this case we get three interviews which includes actress Lee Hwa-si, producer Jung-Jin-woo and cinematographer Koo Koong-mo and Korean cinema expert Darcy Paquet. Paquet gives a highly interesting overview of Kim’s work and the themes and motifs he used throughout his career. Not only are these rare interviews engaging but they also help put the film into a cultural perspective that, frankly, helped me like the film more on repeat viewings. As a film fan it’s a rare treat to have this kind of insight from the actual people who made it. The disc also includes a feature length commentary by Kenneth Brorsson and Paul Quinn of the Whats Korean Cinema podcast, which, like Paquet’s interview, manages to be both entertaining and informative while also providing much needed cultural context.

We live in a great time when, not only do we get to see a little-known film like Woman Chasing the Butterfly of Death in stunning 2k but we also get an array of bonus features that go in-depth into the making of the film and its place in cinema. Mondo Macabro has released this as a limited edition of a thousand units and is currently sold out. Not to freight though, a standard edition is now out and available on their website!