Werewolf in a Girls Dormitory (1961) Howls onto Blu Ray Review

In the annuals of great movie titles you have The Texas Chainsaw Massacre, Attack of the Killer Tomatoes and of course Werewolf in a Girls Dormitory. These titles may not be subtle but they are so damn memorable. I had avoided this movie somehow, despite being very much aware of it and this kind of schlock being in my wheelhouse. Now with Severin re-releasing this film in a brand new uncut transfer its the perfect time to watch this hair raising '60's black and white oddity. 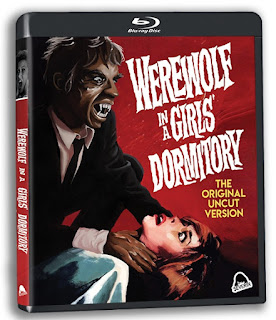 The arrival of a new science teacher brings with it savage wolf attacks for the co-eds of a school for troubled girls. It turns out that a student named Mary Smith (Mary McNeeran) was blackmailing a teacher and ends up brutally killed. Everyone thinks it was done by an animal but her friend isn't so sure. Who could the werewolf be and how many will die by its vicious grasp. So, if you love a lot of talking, WIAGD is the film for you. Basically you have the mystery surrounding one of the girls who is attacked at the start of the film as well as who the titular werewolf is. Its sort of like two different movies are mashed together. What bogs the film down isnt just its mishmash plot but loads and loads of talking scenes that work to dump lots of exposition to the audience. This would be OK if the story seemed to pay off in a interesting way. I think you have to be a hardcore fan of retro-cheese to find some fun in this movie. And while I do love a good-bad movie I found this a bit on the dull side. I guess I was hoping the film played up the humor and camp aspects rather than present a way too serious mystery-werewolf film. I will say I loved some of the cheesy dialogue as well as the moody atmosphere which very much benefits from the black and white photography. 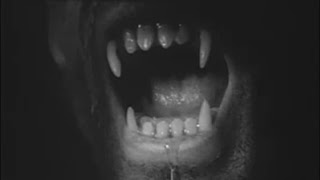 Werewolf has for a long time languished in the public domain hence you've no doubt have seen this re-released many many times on VHS and later DVD. And as you might expect from small labels re-releasing most were not very good using old scratchy prints. Not all mind you but nothing like what we are getting in 2019. Severin is the first North American label to take this film scrub it up and make it worthy of having in ones film library. The film is given a brand new 2K scan from vaulted film elements which is nothing short of amazing considering its a wonder these elements even still exist.   The picture is incredible and I recently compared to to some older releases and the difference is like nice and day. I adore the fact that Severin can take a film like Werewolf in a Girls Dormitory and give it a shiny new coat on HD. For purists the film is presented in both its original Italian Mono (with subtitles) as well as an English Dubbed Mono track. Its this attention to detail that makes labels like Severin top dog. The extras are slim but still damn good. An interview with the screenwriter Ernesto Gastaldi is includes and was very entertaining. Probably my favorite feature is the commentary by Actor Curt Lowens moderated by David Del Valle (from the Retromedia DVD release) is ported over.  Lowens had passed away in 2017 making this a worth while artifact for fans of this film. The icing on the cake is Del Valle himself who is always fun to listen to. Both the US and Italian original trailers are also provided as well as the Alternative Opening with the infamous "Ghoul in School" which is sadly not on the soundtrack-most likely due to rights issues.

Other treats in this release is a re production of the Original Photo-Comic & Directions to be a Werewolf. The other fun thing is the addition of a soundtrack CD of the films score. I may not have been a huge fan of this film however I can tell a lot of love and care was put into this release. It looks amazing and has some great extra features. This is the definitive release of this film. A Must Own!