By the end of the '80's the slasher genre was well past its expiration date and was more about parodying these films rather than taking them in a new interesting direction. You saw this with films like Doom Asylum (1988) and the film we are going to talk about today, Unmasked Part 25 (1989). 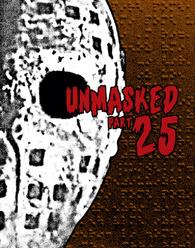 Clearly Unmasked pays not so subtle homage to Friday the 13th (1980) and its later entries, it obviously not only uses Jason's iconic hockey mask (that didnt come into play until the third film)
it also features the killer, named Jackson having a similar tragic backstory ala the first Friday film. But its not just slashers that it 'borrows' from. It also nods to Bride of Frankenstein (1935) even paraphrasing a famous speech given by the blind hermit to the Monster. I also cant help but feel like the love story between a disfigured misunderstood man and a blind woman seems a lot like The Toxic Avenger (1984). Unmasked draws inspiration from a lot of films but never feels like it finds its own voice. Its a slasher send up with a strange love story that is fairly earnest in its execution but we never know exactly what is meant to be serious and what is meant to be taken as stabbing satire. The meta humor and fourth wall breaking jokes come off more awkward and jerky than as clever as the screenwriter maybe thought they were. Its a movie about a killer with a midlife crisis but they never really explore this as much as they could. 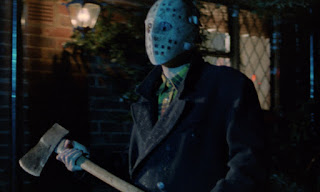 One on the plus side the effects are OUTSTANDING! The gore and splatter effects feel equal parts over-the-top cartoonish and grisly realistic striking a perfect balance. Even the chewed up face of Jackson (Gregory Cox) shown in full daylight is decent. The film has a visual flare that I wasn't expecting in a good way. Neon reds an greens light certain set pieces which felt very much like a a tip of the hat to Bava/Argento. Some of the jokes are really quite brilliant-but some feel like they fall flat.

Unmasked is a really interesting beast as its clearly taking the piss out of the genre but strives for some actual emotional weight, does it mix well? Sort of. While the plot has some holes and could have used some tightening up, its clear that the filmmakers love the genre and modern slashers they reference but also try and make Jackson almost like some classic literary figure like  The Frankensteins Monster and Erik from The Phantom of the Opera which is pretty interesting in the context of the story. Its fun and gory enough to 'mask' over some of its less than stellar qualities. Its bad but its earnest nature and eye popping visual flare and great effects makes it hard to out right hate. A film worth watching especially for hardcore slasher fans.

Vinegar Syndrome really does a EXCELLENT job with this release. First off we get a beautiful looking print. Taken from the original 35mm negatives the team really make this late '80's film shine. As I said i loved the visual flares that filmmakers provided and this new print really POPS!  As always the extras are fun and we are treated to some great stuff. We get not one but two a lively commentaries. One  with writer/producer Mark Cutforth moderated by Justin Dectoux of Laser Blast Society. The commentary is with director Anders Palms moderated by film journalist David Flint.

As much shit as I give this film it wasn't terrible and Vinegar Syndrome really put a lot of hard work into this release. Well done!