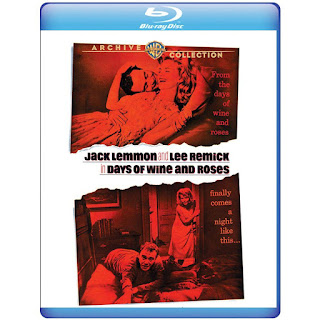 Blake Edwards has directed such classics as Breakfast at Tiffany's (1961) and the classic screwball comedy's like  The Great Race (1965) and The Pink Panther (1963) . And while he mastered the art of laugh out loud comedy he also could do emotionally wrenching movies like Days of Wine and Roses (1962).  Joe Clark (Jack Lemmon) is a high spirited PR executive who meets a lovely secretary Kristen (Lee Remick). At first the pair seem opposites but with Clark's charm he wins her over and the two quickly develop a romance -but the problem is Joe is already in love with booze. Now straight edged Kristen starts Joe's pension for drinking and the two spiral within their now toxic relationship. Often considered the most haunting and devastating honest film about alcoholism ever put to screen Days of Wine and Roses is really a great film.  At nearly two hours the time is paced incredible well and Edwards takes us on a roller coaster of highs and lows and a descent into rock bottom. Blake wisely never judges his characters but rather presenting an honest look into a problem many people struggle with daily. The real tragedy of the story is how addiction can leak onto those we love and its heartbreaking to see good girl Kristen going down a dark path. 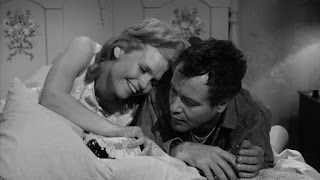 Of course the film hangs onto its stellar performances. Lemmon admitted in the '90's that like his character Joe, he he himself really did struggle with alcoholism. Lemmon must have used those demons to portray the lovable but damaged alcoholic.   Jack brings a nuance to the role that is startling and true. Equally great is Lee Remick. Arguably Remick has the more challenging part, as she must transform from a good girl secretary to a mirror image of Joe Clark's battered addiction. Both Lemmon and Remick were nominated for Oscars for their performances but sadly neither one. In fact this film was not even nominated for the Best Picture Oscar which in hindsight is a huge snub. Heartbreaking, truthful and filled with unforgettable moments and performances Days of Wine and Roses is a masterpiece and considered the best film about its subject matter.

Warner Archives really does a great job with this 2k scan of this classic film. Details are sharp and the new print really shows off Philip Lathrop (The Pink Panther, Earthquake) outstanding cinematographer. Warner has really been doing a fantastic job with how much care they put into restoring their back catalog . The sound is great as well and sound cases Four time Oscar winner Henry Mancini's excellent score. Warner was able to port over Edward Blake's auto commentary and considering Blake passed away in 2010 so it makes this artifact invaluable. It also includes a vintage interview with Jack Lemmon which like the commentary is such a great feature to have. Rounding out the features is an original trailer. I am a huge fan of this movie and as always Warners has taken special care in making this film look and sound great and port over some great extras. A must own!