Penelope Spheeris is a filmmaker that is incredibly interesting to me. She started out making films like Decline of Western Civilization Trilogy an invaluable documentary about the punk scene as well as the cult punk classic Suburbia (1983) and The Boys Next Door (1985). She went onto make big budget Hollywood family films. Then she just kind of stopped and hasnt directed a feature since 2012. I was really excited when Severin announced they were releasing this '80's movie that doesn't get talked about nearly enough. 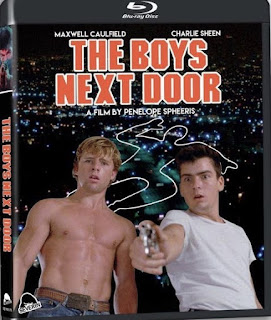 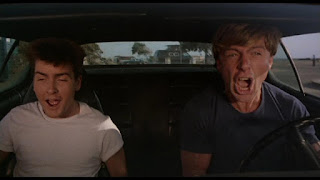 The film opens with a unnerving credit sequence about real life serial killers, and while its a bit heavy handed its effective none the less. It sets the tone for a bleak, cold and grim film. Spheeris pulls zero punches in terms of showing real life monsters and doesn't glamorize or glorify them. The film wisely builds up the first murder at an exhaustive pace and it when it comes it hits you like a sledge hammer.

Its really disturbing and it got to me I think even more being a gay man. The film is a dark character study so it hangs on its performance. Thankfully they are spot on. Maxwell Caulfield gives a down right terrifying performance as Bo. When he flies into a rage it feels like the actor is truly unhinged and out of control. Sheen is also great and helps balance out Maxwell's character. Charlie at this point was not quite a break out star, only doing one notable film at this point Red Dawn (1984). As much as I love Sheen its almost distracting seeing him in a gritty movie like this. Its funny to think he plays the less crazy character out of the pair. The legendary Christopher McDonald also has a small role. Boys Next Door is styled in a very punk rock way, both in its amazing soundtrack and also bright green and purple hues for certain scenes. This is such a well crafted haunting little film and its had to believe its directed by the same person as The Beverly Hillbillies (1993) or The Little Rascals (1994). Imagine renting this movie in the '90's thinking you`get something similar.

Severin REALLY outdid themselves with this release and its features. The film is restored in 2k and looks great. You can really notice this new print in night scenes. Penlopes punk flare with its neon hues really pops here. The bonus features are great as well. First off I was really delighted that a commentary by director Penelope Spheeris and star Maxwell Caulfield is included. She and Maxwell are entertaining as hell. This disc also features some great interviews including author Stephen Thrower,, Penelope Spheeris, Maxwell Caulfield, Christopher McDonald and they even tracked down the street band performers from the film. Its these little attentions to details that makes Severin such an exciting label. Rounding out the features is an alternative Opening Title sequence and extended scenes, and an original trailer.