So, honest time. Operation Crossbow was a film I had never heard of and if im being brutally honestly not something I had high expectations. While I do love action films, War films have never really been that appealing to me. But I had heard good things and I've been trying to break out of my cinematic comfort zone-so here we go. 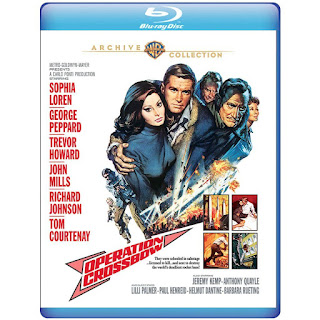 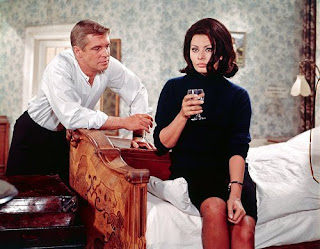 A small band of American Allies are sent into enemy territory when intelligence learns that the Nazi's are working on powerful rocket.  The smart scrappy rag tag group must stop the launch before it can do serious damage. Problems arise when their allies are one by one compromised. Despite not being that excited about this film going in I must admit I was pleasantly pleased with it overall. This is one of those movies that is fun to watch on a lazy cold Sunday and switch off. I can certainly see the film having influences over other films most notably I got a Inglorious Bastards (2009) vibe throughout. My biggest issue I think with this film is, at nearly two hours it does feel a bit bloated in parts. Some scenes just do nothing but stop the film dead in its tracks. The first act is a bit of a slog with lots of lengthy exposition and setting up characters. I cant totally fault the film for that, as it is important stuff its just a bit of a bore. However thankfully the second act picks up and seems to clip at a decent pace for the entire rest of the run-time. Even with some slow bits I was completely engrossed into the plot the characters even though we know virtually nothing about them. Anderson probably best remembered for directing Logans Run (1976) injects some levity, action and nice set pieces in his epic. Some measures are taken to make the film more realistic than most. For example I loved the fact that the German's actually SPEAK GERMAN! The costumes and production values are great as well. Overall I came with low expectations but was happy to find out this is a good film that if trimmed a bit could have been great.

Warner Archives provides a nice restoration. I dont know if its a 2K but its a nice clean clear print. Certain moments look abit darker/blurry but this is only very very briefly. Overall the picture is WA's typical excellence. They will are killing it with their recent releases. The extras are a little skimpy for this release. We do get a nice  a vintage featurette entitled A Look at Crossbow. Rounding out the features is a trailer. Operation Crossbow is a film that despite some dull parts entertained me and I am glad I took a chance on it.