Noirvember: Today we are looking at a British Noir that explores the atomic age paranoia. 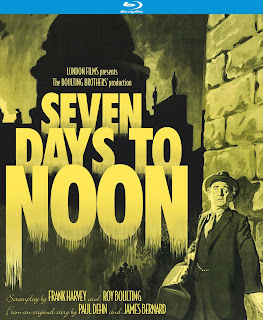 Seven Days to Noon seems to play  off of a London still scarred from the destruction of WWII and its paranoia and anxieties over atomic weapons. In '50's post WWII America, was also exploring this theme in the gaze of any number of radioactive created creatures and beasties along with aliens -another by product of a post WWII US was the film Noir, which often centered around pulp crimes stores with German Expressionistic moody lighting and a bleak outlook. Not to be out done the Brits also made their own Noir films and today we are looking at one of them. A scientist named Professor Willingdon (Barry Jones) goes rogue and smuggles out a highly explosive bomb. He writes to the Prime Minster (Ronald Adam) that if he doesn't denounce the use of atomic weapons to the country he will blow up a huge chunk of London, killing innocent people. A huge manhunt is on and the clock is ticking. Noon is a movie very much of its time, and can very much be a meditation on life and fear in a still recovering London. Several scenes including the finale take place in a bombed at church, which seems fitting as the film not so subtly references the bible on many occasions. I'm not what contextually these biblical references add to the movie or the story but we get them regardless. 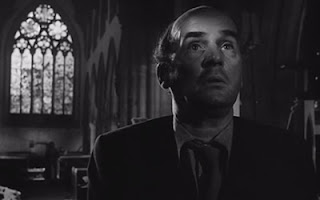 Probably the most interesting thing about the film is how the character of Willingdon is portrayed. It is really interesting that the"villain" of the piece is framed as not as a raving madman hellbent on blowing up London nor is her entirely sympathetic though I think he is lit more of a 'the ends justify the means' way. He clearly is still the bad guy yet its this gray area in his character that is pretty remarkable. Its something you defiantly would not have seen in an American films at the time.

Bringing Professor Willingdon to life is Barry Jones (Brigadoon) who gives a layered performance as the fugitive scientist. The film could have done a better job at racket up the tension, something Hitchcock could have easily done if he was not making American films by this point (his film Stage Fright was released this same year). And, yeah maybe its unfair to compare this to a Hitchcock film but I cant help but think someone with his skill at creating tension and suspense is greatly needed here. Overall its a good film though at times it does slog along and lacks some needed suspense. Kino Classics releases this Brit Noir just in time for Noirvember. The picture looks great and really captures the amazing work of Gilbert Taylor. You may not know Taylor but hes done everything from Star Wars: A New Hope, The Omen, Repulsion and Hitchcocks Frenzy just to name a few. His work is brilliant and this new restoration really highlights his genius as a cinematographer.  The extras include a gallery and trailer. A hidden gem about post War paranoia in Britain, Seven Days to Noon is a solid thriller and in a way a character study as well.