Noir November keeps on lurking in the shadows. This week we have Woman in Hiding from 1950 starring the lovely and talented Ida Lupino. If you are interested in Ida Kino has recently released a box-set of movies she directed. 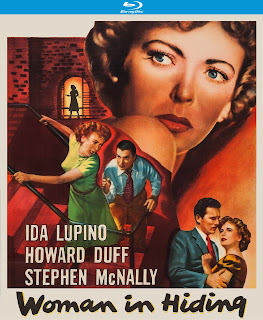 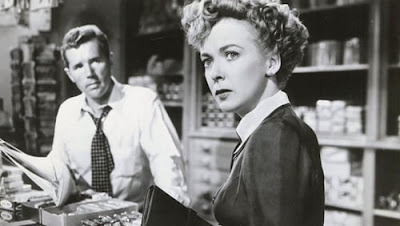 Woman in Hiding (1950) wastes no time with a very dramatic opening of a woman who will later learn is named Debora (Ida Lupino) getting in a violent car crash. A team goes on the search for her and she is presumed dead. Was it an accident or did she kill herself?  Through a flashback we learn the tragic event took place during the night of her wedding to the handsome Selden Clarke IV (Stephen McNally). But Debora is not dead and she soon finds herself swept up into a deadly murder plot.

Unlike in the last Noir I reviewed Naked Alibi (1954) WIH features a strong woman and an more involved and interesting story. Michael Gordon's film starts as a dark Gothic romance that spirals
into a bleak Noir. The first act is incredibly tight with a nicely paced mystery and there defiantly were some nice 'Oh shit' moments that helped keep me on my toes. And for the most part the film manages to keep up its steam through its brisk run time. The twists themselves are handled well and while some elements were kind of predictable I still thought they were entertaining none the less. I have to give huge props for the filmmakers for writing Lupino character as  a smart woman with agency and its clear that, even though she is victimized she is far from a victim. And while Keith (Howard Duff) does come to her aid its Lupino;s character who outsmarts and escapes Clarke several times throughout the film. She is very much in control of her situation. This is pretty refreshing not only for a Noir, but for films at the time in general. Gordon sustains the menace and tension until a great finale. Woman in Hiding also features some incredible black and white photography by cinematographer William H Daniels. Daniels won an Oscar for another better known Noir, Naked and the City (1948).  Like the title would suggest, Woman in Hiding, has been hidden for far too long and thanks to Kino Noir fans can finally discover or re-discover it with a great re-release.


Kino has lovingly restored the film and it looks great. Daniels stark black and white photographer is truly celebrated here and every little detail is sharp and crisp. Any scratches and artifacts have been removed and what we as fans get is a clean and vivid picture. As with Naked Alibi Kat Ellinger gives a wonderfully insightful feature length commentary that helps gives context to the film. Rounding out the features is a trailer. This is a worth while film and an equally great disc. Consider this a must own for Noir lovers.