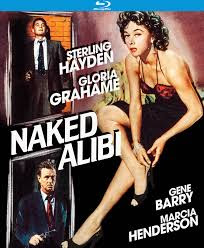 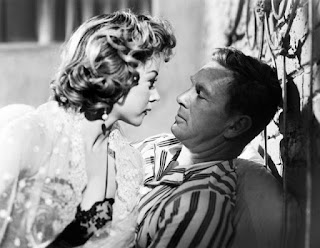 Al Willis (Gene Barry) is the prime suspect in the killing of three police officers. Willis swears his innocents. Chief Joe Conroy (Sterling Hayden) is fired for police brutality when he is caught roughing up his suspect, by a photographer no less. Even though the Chief is stripped of a badge he and other officers still follow the man nearly around the clock.  Its through this that we soon learn that Al isn't quite the good wholesome family man he presents himself as. Directer Jerry Hopper never really made it big in films but in the latter part of his career found steady work as a television series director doing everything from The Addams Family, Perry Mason, Gunsmoke etc. Here he dips his toe into the world of Noir with Naked Alibi.  As much of a Noir fan I actually never heard of this one despite being a huge fan of both Gloria Grahame and Sterling Hayden. The film has a weird message, making the abusive cop played by Hayden as the hero and his constant abuse and harassment of Willis justified. But its not the films morals I have a problem with, as most Noir films and by extension their heroes or anti-heroes often exist in this morally gray area-some even being more villains themselves. No, what bothered me about this film it its kind of unremarkable. I would have loved a bigger build to some of the films revelations as well as giving the characters a bit more agency within the plot. Grahame is in my opinion woefully underused and is more of a sympathetic victim rather than a strong willed femme-fatale. The film does have its highlights which of course includes its leads Hayden and Grahame who turn in a effortless performance. It also has a rich and moody Noir look thanks to Oscar winning cinematography Russell Metty. Metty really helps set the tone of the film and his talents have been used for classics like Bringing up Baby (1938) and Touch of Evil (1958).

At a pretty brisk run time of just under ninety minutes, Naked is perfectly serviceable but in my honest opinion kind of by-the-numbers Noir, despite its talented cast.  I just was looking for a tighter more focused script that hit a little harder.

Once again Kino out does themselves with presenting a outstanding Blu-Ray! Naked Alibi never looked better with a sharp picture that gives depth to its beautiful black and white contrast. It really highlights Metty's skill as a cinematographer.  For being a film made over sixty years ago it looks fantastic with no distortion, scratches or artifacts. It also sounds great sporting a 2.0 mono soundtrack. The extras include a feature length commentary by film historian Kat Ellinger which is informative and entertaining to listen to. Rounding out the features is a trailer. For fans of this film its a worthy addition to your collection.