With Criterion releasing Police Story 1 and 2 and now Warner Archives Mr.Nice Guy, its been a good year for fans of the high flying action packed Jackie Chan. Chan is legendary in the field of stunt work but also oozes charm that translates to the silver screen. Chan has been acting and doing his amazing physical stunt work since the early '60's however he didnt truly become a household name until the mid to late '90's. His break out movie to Western audiences was of course Rush Hour (1998) released just a year prior to Mr.Nice Guy.  Thanks to Warner Archives we get to see this legendary late '90's film of Chan's in a regular and extended cut. 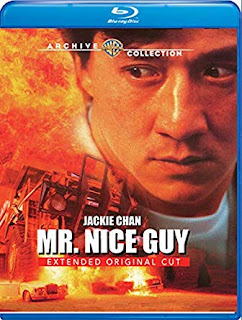 Nice guy Chief Jackie (Jackie Chan) finds himself in hot water when he gets mixed up with a reporter. This reporter just happened to film a drug deal between two feuding crime families. Now they are after her VHS taped evidence and anyone connected to her which now includes Jackie. Mr. Nice Guy wastes no time featuring a pretty jarring murder-moments later we are introduced to our lovable hero played by Chan. Despite some tonal issues MNG really dishes up just about everything you could want in a '90's action flick. Everything is so deliciously over the top from the laughable 'drug lords' that feel like they are out of a comic book to the hammy acting and cartoon style high flying action. Seriously the first ten minutes are nearly non stop over the top set pieces. It may sound like im slamming the film but far from it-its a temple to action-cheese and Chan carries the film to perfection. Speaking of I think it goes without saying but im going to anyways, Jackie Chan and his charisma is on point and its not hard to see why Hollywood snapped him up to headline films like Rush Hour. You instantly like his character and its always fun to marvel at Chan's impressive stunt work. The film finds a nice balance between the action and comedic elements and while it never really breaks the mold in terms of an original story, its still a whole lot of fun. I truly feel that the filmmakers were in on the more tongue in cheek moments, but it never feels like full on parody. I had never seen this movie and this seemed like the perfect time to do so. 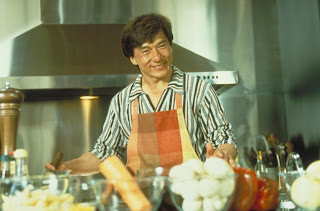 New Line famously had cut the film for its American release trimming nine minutes of footage, re-arranging some scenes and also dubbing certain actors. These cuts were to get the film to a PG-13 level but also to appeal with a Western audience. If you always wanted to see the original cut, you are in luck because thanks to Warner Archives you now can. The film looks great as it has a brand new 4k scan from the original film footage. The picture looks great and the image is crisp with no color de-grading or distortion. The sound is great as well with a nice clear 2.0 Mono track. Sadly the disc has no features besides a trailer-it does have the original NL version if for some reason you pine for the PG-13 version instead. Even though I cant see watching this cut of the movie I love the fact that its available as well.

Critics at the time were rather harsh on this film and it holds a 41% freshness rating on Rotten Tomato -but honestly I think those critcs that didnt like it couldnt see the fun in the film and only focused on its somehwhat cliched plot. For those who love these types of films you wont be disappointed. It serves up high flying kicks to the face, big loud set pieces and a heaping helping of '90's cheese Jackie Chan style! This is a must own title for funs of  Chan and action films in general. Stuffy critics be damned.

Out Now from Warner Archives!