The early '60 was an interesting time for Hollywood, as it was slowly phasing out films aimed to older people and moving into counter culture teen-aged fare. It was also a time when studios started tackling more taboo subject matter as the Production Code was slowly easing up on its grip. Like the ape itself, Konga (1961) is a film very much of another age. Its more of a creature-feature you`d expect from the '40's or '50's and not the same year as films like West Side Story, Judgement at Nuremberg etc. 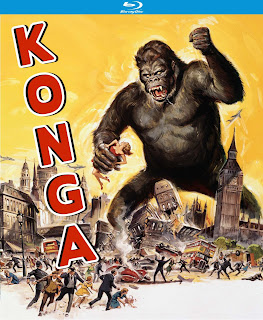 Dr Charles Decker (Michael Gough) presumed lost in Africa but returns alive and well with chimp in head and an amazing discovery. He has found a way to grow plants to huge sizes and, as you might have already guessed his monkey sidekick is going to get the same Bert I Gordon treatment. However the Doctor uses his new giant monkey friend to get revenge on those who he feels has wronged him in the past. 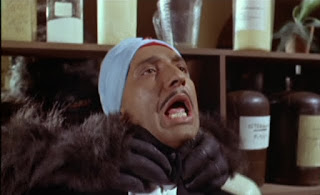 Its easy to pick apart whats bad about Konga, from its plot holes, its bad dialogue and the special effects that are laughably bad even for this type of film.  And lets not even get started on how much of a King Kong ripoff the film is. But I might be able to forgive all this if it wasnt for, this being a giant ape movie that skimps on the ape. The film spends a lot of time in lengthy dialogue and exposition and not enough on actual big monkey terror filled hi-jinks. This is kind of disappointing as the audience has to wait nearly an hour to we get full on ape-action.  The pace is also not helped when over half way in we switch to some teen-aged subplot in the form of a field trip Deckers students take. Not only a jarring late addition but adds zero to the overall story, besides maybe giving Konga a victim. Its smacks of producers tacking it on to appeal to the "teen-market" which was flourishing in the '60's.In fact a working title for this film is I Was a Teen-Aged Gorilla  The one bright spot is Michael Gough who really makes this movie. He plays the sinister mad doctor with his signature charm and swagger, delivering his lines with the pur that is a mix of malevolent yet soothing. Outside of Price, Gough had such an amazing voice, especially for villains. Truly Michael laps up this role with vigor and its such fun watching him in action.

I was hoping for a cheesy monster movie with one of my favorite British actors Michael Gough but the film never fully commits to its, lets face it silly plot. What we get is a slog to a fun third act. But its too little-too late. It feels like John Lemont could have taken things less seriously and played up the inherit b-movie charms. If only the rest of the film had the fun energy of the final fifteen minutes this could have been a really enjoyable cult classic. Kino Classics restores this film in 2k and WOW does this film really POP with color. Obviously the producers wanted to show off that they had the budget for color and everything is so vivid in its palate. For the most part the picture is artifact free and has a crisp clean look. Extras include a vintage Radio Spot, Image Galley and Trailer.

Great release with an awesome looking picture for a sadly Meh movie.