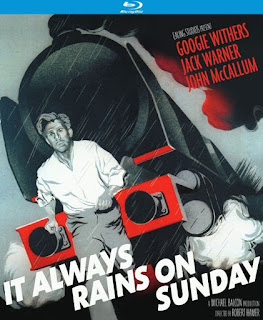 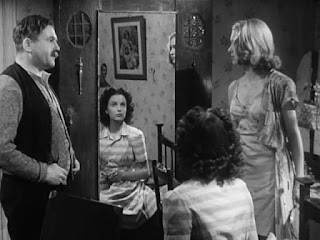 Taking place on a rainy Sunday on Londons East End, the film follows several stories of criminals, cops, kids and troubled marriages in this interesting post WWII British melodrama. I wasnt a big fan of this movie right away and honestly it took me a second view to warm up to it. The biggest thing was the first go around I thought the main drive of the story was the plot between the wanted criminal on the lamb and showing up at his ex girlfriends house, her now a married woman with kids. So, needless to say when the film was criss-crossing between these other unrelated plot lines it was confusing to say the least. Only later did I learn that this film deliberately bounces back and forth between subplots as a sort of anthology. Once I knew what I was dealing with on my second viewing I liked it a lot more, especially now that I wasn't trying to connect every story thread together like some detective. What struck me from the start was the care in which the filmmakers took in giving us a rare look into the lives of lower middle classic people in East London and it is incredibly easy to get swept away by the stunning black and white photography by Douglas Slocombre (Raiders of the Lost Ark, The Lion in Winter), Slocombre and director Robert Hamer craft a stark, darkly funny and intimate portrait of life for some characters of East London. The film was landmark for putting a spotlight on a grime chapter in post-WWII London and acts as a time capsule of a certain time and period.

Kino Classics has really given this film a great release. The new HD restoration is very well done and showcases Slocombres breathtaking photography, which looks incredible. You really notice little details that seem to pop with this restoration.

The extras are great as well. A feature length commentary by Film historian Imogen Sara Smith helped give me some better insight into the film and its production. We also get a nice retrospective on the film entitled: Coming in from the Rain: Revisiting It Always Rains on Sunday which runs about sixteen minutes. Like the commentary this featurette really helps one put the film in a better perspective and helps give you both some historical and societal context. Really great stuff.  Rounding out the features is a locations featurette and trailer. Kino Classics gives an A+ release to this under loved British film and that is what I adore about this label.