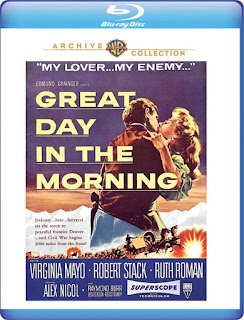 Director Jacques Tourneur sadly was never recognized for an Academy Award despite making some of the greatest films of the ‘40’s including the Noir classic Out of the Past (1942) and the haunting psycho-sexual horror-thriller Cat People (1942). He also has delighted horror fans with such gems as I Walked with a Zombie (1943) and Comedy of Terrors (1963). Tourneur worked in many different genres and Great Day in the Morning was his drama epic. A smooth talking stranger traveling through wins a bar in a card game. Things are far from great for the young man as a host of town folks arent too keen on having him around including two women and a band of Union Sympathizers. 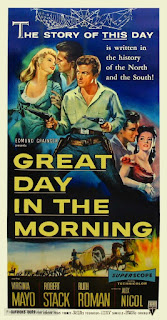 Great Day is a film very much a product of its time, one of those big splashy color action films that died out after much gritter smaller budget counter culture films like Easy Rider (1969) roared into theaters, upsetting the old Hollywood guard. What we get here is a eye popping colored costume drama that has an emotional core but all the trappings of a bygone era of cinema. The film is beautifully shot and is, as most bigger budget films populated by great actors and in smaller roles wonderful character actors. Robert Stack has a leading man charm that carries the film and the always great Raymond Burr gives a terrific performance. Having said that its really the women that truly shine in this one. Ruth Roman, probably best known for Hitchcock's Strangers on a Train (1951) is such a treat to watch. Her beauty, talent and the way she carries herself is all on point and she really knows how to command attention. Not to be outdone is Virginia Mayo (Best Years of Our Lives) is equally good as one of two women attracted to our Stack's character. The writers give her more depth than you'd expect for this time period and while she sadly isnt allowed to have much agency within the story she is still given some great emotional weighty scenes to show off her talents. Despite its great cast and well done technical merits the film tends to be dull in places and doesnt focus on its core emotional centerpiece. I do like that the impending Civil War is used as a backdrop for the plot and its themes. Still, it is a sweeping and well made period drama and even though I am not a huge War film fan I enjoyed it. It has a charm only a late '50s bright colored costume drama from Hollywood.

Warners Blu Ray looks great! This film was done in old school Technicolor and WOW does the colors really pop with this new restoration. Images have depth and detail which you frankly do not get with older releases.The disc includes four short films directed by  Jacques Tourneur.