Robo Cop (1987) is a film I came to later in life (in my 20s) and instantly fell in love with. Arrow Video has really put their heart and soul into this release which quite honestly is the best us fans are likely to ever get. 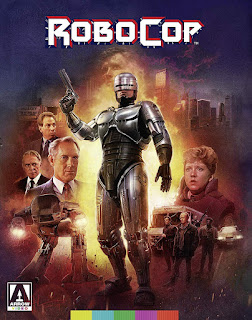 Robo Cop works on a lot of levels. On the surface you have a gritty yet darkly funny fast paced action film that delivers on great over-the-top performances, action and some ‘80’s style ultra-gore that boarders on the cartoonish. Speaking of, the villains are equally over-the-top and its always fun to see Kurtwood Smith from That 70s Show as the ring leader Clarence. However, if you scratch just below the surface the film is brimming with a biting social satire and even a Christ-allegory (comfirmed by Verhoeven himself) . So, if you enjoy it for its surface level fun or also take in its sardonic message about ‘80’s consumerism and greed intermixed with a  violence in a future punk version of Detroit, it’s a damn great movie. Robo Cop is to me cinematic comfort food and is the kind of film you can put on any time and enjoy it. Arrow has CRUSHED it with their new release of the film. 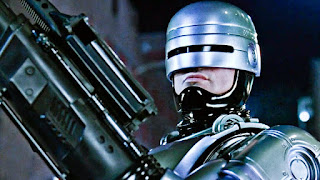 I cant believe my mail box didn't explode with all the amazing awesomeness that was delivered with Arrow's Robo Cop 2 Disc Edition. The label has really went above and beyond and even further with this release. The picture is scanned in 4K from original camera negatives from MGM and approved by Paul Verhoeven himself. The picture looks incredible and is crisp, clear and lots of details really pop with this restoration. Disc One Includes the Directors Cut. This disc has the bulk of the extras: They include: archival commentary by Paul Verhoeven, Jon Davison and Ed Neumeier . This was recorded for the theatrical cut and re-edited in 2014 for the directors cut. Two new commentaries are included one by Film historian Paul M Sammon and another by fans Christopher Griffith, Gary Smart and Eastwood Allen. The Boardroom: Storyboard with commentary by Phil Tippett, Four deleted scenes, Composing Robo Cop: New tribute to Robo Cop composer Basil Poledouris, Robo Props: A look at original props from the film, 2012 Q&A with the filmmaker and cast/crew, Robo Cop Creating a Legend three archival featurettes, Robo Talk a new conversation with co writer Ed Neumeier and filmmaker David Birke and Nick McCarthy (director of Orion Pictures), Truth of Character a new interview with Nancy Allen, Casting Old Detroit a new interview with casting director Julie Selzer, Connecting the Shots a new interview with second unit director Mark Goldblatt. WHEW! Seriously this level of extras is staggering. The features also include an Easter egg hidden feature and theatrical trailers.

Disc Two Theatrical Cut: Features the original cut of the film with an archival commentary by Paul Verhoeven, Jon Davison and Ed Neumeier, Two Isolated Score tracks (the Original and Final Theatrical Mix). One of the real treats is a Third cut of the film, the edited for television version, which includes alternate dubs and edits of several scenes, A Split screen comparisons between the Directors cut and the Theatrical Cut and the edited for TV version. This is a really great feature which not enough labels do. Rounding out the goodies in this set is a booklet 79 page booklet written by Omar Ahmed, Eric Niderost, Christopher Griffths and Henry Blyth. They all do a very fine job telling the story behind the film. A great fold out poster is included with newly commissioned art as well as the original poster on the reserve side. You also get some six collectible postcards.

Overall: For just under thirty bucks on Amazon, Arrow has jammed PACKED this release and in my opinion is worth very penny. You will pay more than a dollar for this set but its worth every penny.

Arrow is such an interesting label as it can do small gems like The Prey and  bigger cult films like Robo Cop with the same kind of love and attention. Without a doubt on my list for best release of 2019. So if you are on the fence about this release -pull the trigger on it, you wont be disappointed.