Flowers in the Attic was a outstanding book by VC Andrews that spawned a series of sequels and two film adaptations. Well both screen versions change things from the book (the newer film is more faithful) both are entertaining in their own ways. Jeffery Bloom, probably best remembered by horror fans for directing the 1980 cult classic Blood Beach was tasked to bring the dark and haunting novel to the big screen. Books are never easy to adapt let alone one that is as controversial as this was and still is. 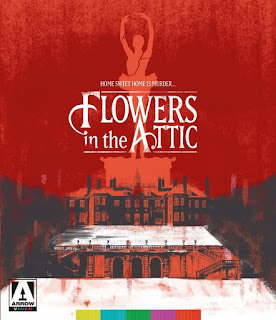 I was a big fan of the book series by Ms. Andrews and read them probably in my mid teens. Sure, other kids had hoped on the Harry Potter craze but I enjoyed this perverse and harrowing Gothic novel with an updated twist. Looking back I was an off kid. Needless to say I am a big fan of the book series and later Blooms adaptation. In 2014 a more faithful television movie was produced (though as mentioned above it still omitted things and changed things around) but I still have a soft spot for the original 80s film. Shortly after losing their father, a group of children are mysteriously spirited away in the middle of the night by their Mother (Victoria Tennant) and hidden away in an attic. The Mother assures her kids its all for the sake of gaining her Fathers affection and thereby getting written back into his will. Without this money she tells them, they will have nothing at all. Keeping strict order in the attic is the Grandmother (Louise Fletcher) who over sees everything with an iron fist. 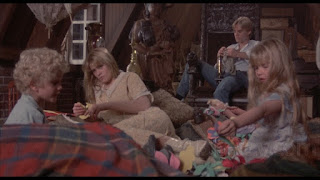 It has been quite a while since I seen Bloom's version of FITA and it held up for me...for the most part. My chief complaint I think is the acting which ranges from wooden to over the top. It almost feels soap opera level at times, which I guess is fitting as the film acts as a preserve daytime soap. And, while I hate to single one actor out, I feel like Swanson gives an uneven performance as Cathy. This so-so acting is kind of disappointing when you consider this movie is based around story and performance rather than showy set-pieces. Despite this the film is rather good. Sure Bloom takes liberties with its source material and the more taboo aspects of the movie are toned wayyy down however the core of the book remains intact. Bloom makes the best of the films modest budget and the production looks much more expensive than it was. The fact that a bulk of the film takes place in a bedroom and attic and a few interiors helped quite a lot im sure. I think I was most surprised by how creative the camera work is and how shots seem to be carefully crafted for maximum effect. Add a tight story with a brisk run time coupled with a wonderful score by Christopher Young (Hellraiser, Drag me to Hell) and you get a solid adaptation of a wonderful and strange book. Also for any haters out there, dont forget Andrews herself signed off on the screenplay. Interesting side-note Wes Craven drafted a script and was set to direct until that fell through. Craven had always explored the fractured family core so this would have been right in his wheelhouse. Sadly, of course we never got that film however Bloom does a great job with what he had to work with. Limitations with budget and studio meant a more faithful adaptation couldn't be done and I dont fault the filmmakers for that. Honestly it boils the essence down to its core. Interestingly enough scenes were filmed that explored the incest aspects (which is a major part of the book) but, though it was extremely tame it was scrapped. While not loved by critcs the film went onto gross over double its money and is still enjoyed by fans.

The picture is a slight improvement over the previous Image Entertainment edition which was already pretty good. While you still see some artifacts the picture for the most part is crisp and clean. We get a nice 2.0 Mono that showcases Young's incredible score. Dialogue is clear as well as the sound design. Where FITA shines is the host of new features. We get a slew of entertaining interviews from cast member Jeb Stuart Adams (Chris), Composer Christopher Young, Cinematographer Frank Byers and production designer John Muto. This really covers just about every major aspect of the films production. Fans also get a rare look at the alternate ending which was shown only at test screenings. Included is the final edit of the ending with commentary by replacement director (uncredited) for the scene Tony Kayden. Editor-in-chief of Diabolique Magazine Kat Ellinger provides an insightful commentary for the film. Oddly enough Jeffery Bloom is no where on this disc but Arrow, being the completest they are no doubt tried to get him for an interview or commentary. It makes me curious if Bloom doesnt want to talk about the movie or it was a simple case of scheduling. The packaging his great featuring new art by Haunt Love and includes original cover on the reserve. Also a booklet is included with an essay by author Bryan Reeseman. Overall: While the film has its flaws it remains a 80's cult classic that, despite it playing with kid gloves with the source still manages to be a wildly entertaining film. If you are new to this film or a fan this is a must own! Arrow really went above and beyond for fans of FITA!