Director Jeff Kwitny has only one other director credit, the slasher outing Iced (1988) so I wasn't expecting much. But shocking it is a lot of fun and is one of weird, whacked out gems that seemed to languish in obscurity that is  until now thanks to the good folks at Vinegar Syndrome. 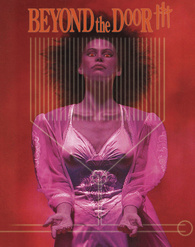 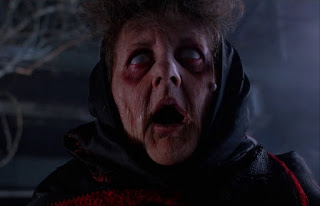 Beverly (Mary Kohnert) is a mousy and seemingly misfit among her classmates and generally gets made fun of. Her and her peers, as part of a class are venturing out into Europe for a field trip. But it seems that Beverly is special after all, being singled out by the same cult the kids are studying. Whilst the kids are asleep in their room a mysterious fire breaks out and after fleeing from cult members they board a train to seek safety. But of course they are anything but, when the evil is still among them.

I kept the plot vague because there are a lot of weird twists and turns and one bat shit crazy finale. BTD has its host of problems like, bad acting, all over the place plot and characters that feel underdeveloped. Having said that, the film is expertly paced and wastes little time in ramping up the acid fueled story. Thats the thing I loved about this movie, for as messy as the plot is , it was never boring. You always had something going on from surreal visuals, cheesy dialogue and of course a lot of blood and gore. This brings me to another brilliant thing about this movie, which is its amazing practical splatter effects. Even as jaded as I have become, the gore is really something to behold and as dated as some of the effects look they still are pretty grisly. Highlights are a double kill (edited between the two) of a man being burnt alive and another poor guy slowly being beheaded.  Adolfo Bartoli did the cinematography and it is incredible. Bartoli a longtime Full Moon/Empire DP really gives this film dreamlike quality. It is dripping with atmosphere and utilizes the bleak countryside to its upmost creepiness. Clearly the look of the film is partly inspired by Bava and Argento. BTD does struggle with its story and the very end feels underwhelmed however I was entertained by the films style and over-the-top grand guignol type blood shed. It a film that is campy, yet its drug laced moments give it a waking nightmare kind of feel.  Overall a fun film that you should check out especially if you are a fan of strange cinema.

Vinegar Syndrome goes full steam ahead with this release. We get a stunning 4k print using 35mm material. The new restoration shows of Bartoli's incredible visual flare and poorly lit scenes are now thankfully visible. It also sounds great with a nice 2.0 digital HD mix. And of course as you`d expect the disc is choked full of great features that fans have come to expect from the company. This includes a director interview, interview with cult actor Bo Svenson (Kill Bill Vol 2) and cinematographer Adolfo Bartoli. This gives you a great cross section of perspectives and the interviews are wildly entertaining. As I mentioned above I loved the look of the film so having someone like Bartoli get an interview is amazing. Despite its flaws this is a wonderfully bat-crap-crazy film and VS has provided some great supplements to go with it. Consider is a Must Own!