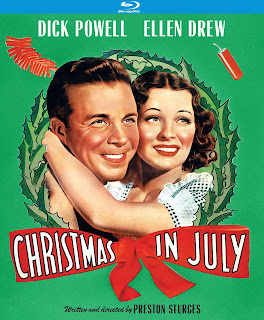 Based on the play “A Cup of Coffee” (also written by Preston in ’31) Christmas in July (1940) centers around a young down on their luck couple Jimmy (Dick Powell) and Betty (Ellen Drew). A big coffee slogan contest held by Maxford House Coffee (a not so subtle nod to Maxwell House) is under way with the grand prize of twenty-five thousand dollars. Jimmy has pinned all his hopes on winning the contest. His co-workers play a nasty prank and makes him believe that he has won the contest with a fake telegram, which he then presents to the clueless coffee president. He as many of us would starts spending the check, not on himself but on gifts his mother, girlfriend and his friends in his neighborhood. Of course, hijinks ensue when its discovered the telegram was fake. 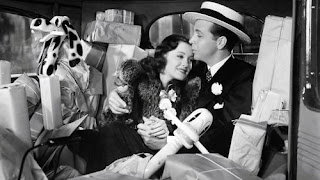 Prestson Sturges never really became a household name and is really only known by hardcore fans of classic Hollywood. Christmas in July comes just a year before Preston would make some of his best loved films like The Lady Eve (1941) Sullivan’s Travels (1941) and The Palm Beach Story (1942). Sadly, while this is a fun enough movie it never really raises to the heights of those later films.

Let me first say what’s good about the film. Sturges comedic and sometimes wry wit is on full display and his trademark lively back and fourths as well as natural sounding dialogue despite some very fantastical situations. His cast shines with Dick Powell playing a lovable every man, whom the audience can very much relate. Powell showcases his charms that made him a hit in films like Murder, My Sweet (1944) and The Bad and the Beautiful (1952). Ellen Drew a B-picture actor does a fine job as Jimmy’s girlfriend Betty. If, like me you never heard of Ellen Drew you are not alone. Sadly she never reached the same level of stardom as her male co-star and it’s a real shame as she is very good in this film. At a brisk hour and seven minutes this is a breezy and enjoyable film. The problem was I had seen this film after his better works and I couldn’t help be a bit disappointed. While yes its funny and it has a certain charm it never reaches the comedic heights as say, The Lady Eve (1941) nor the kind of emotional levels as say an Ernest Lubitsch or Frank Capra film. And while yes, it is a screwball comedy however that doesn’t mean the story can’t be elevated by a strong emotional core.  July kind of has this but frankly the writing isn’t polished enough to hit on anything that deep or profound.

At the end of the day July is a big ball of '40's screwball fluff that, while never gets that deep, is still a lot of fun. Its the kind of movie you can watch on a lazy day and switch off your brain. Kino Classics has released this film in a nice new restoration which looks and sounds fantastic. A running commentary with film historian Samm Deighan. Rounding out the features is an original trailer. If you are a fan of TCM and classic and very light comedies from the ‘40’s you should defiantly put this on your Christmas wish list.