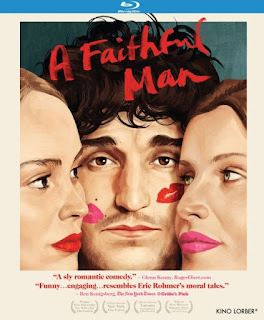 Abel (Louise Garrel) seems to have a good life living with his girlfriend Marianne (Laetitia Casta). His life comes crashing down when she reveals she is pregnant with his best friend Pauls baby. She asks him to leave and he simply walks out of her life without protest. Years pass and Paul suddenly dies and its shortly after the funeral where Abel trys and rekinkle his love. Enter Paul's sister Eve (Lily-Rose Depp) who has been in love with Abel since she was a young girl. Now Eve and Marianne fight over Abel whilst also dealing with other dramas that come with it. 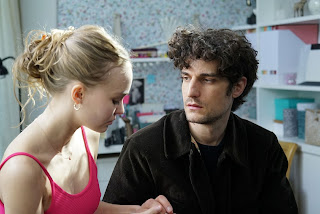 I think the biggest flaw with this film is that, Abel (Louise Garrel) is kind of a dud of a character so its hard to imagine how two women would be fighting over him.  As Depp's character says "Its war" referring to the two going to battle over him. This smacks of some narcissism on Garrels part who not only directs the film but cast himself as the lead and co-wrote the screenplay. Deep describes Garrel's character as the most beautiful man alive...Um. No. Like seriously who writes that bout themselves? Both of these women are so clearly out of this guys league. I`d maybe buy it if Abel has a lot of charm and swagger or something interesting about him, but he doesn't. So, its hard to accept why this love triangle is happening in the first place. This is a big problem as its the foundation for the entire plot. Story wise its a bit all over the place, you have the love triangle, you have issues with Marianne's kid Joseph who may or may not be Abels. Then its sort of suggested that foul play was involved in Pauls sudden death, which is sort of explored but then weirdly dropped. Characters motivations are also kind of hard to swallow. For example Marianne tells Abel she literally flipped a coin to decide whose child she was going to say it was. In any normal situation you`d be furious or at the very least totally mistrusting of this person. Its also not the first strange thing she does/says in the film. But thats the thing, characters act so abnormally its hard to really understand anyone's true motives. It takes one out of the film which never feels like it finds its footing and sets up story lines and never resolves them. Depp and Casta give fine performances but they get lost in their strange sycophantic feelings towards Abel.   A Faithful Man seems hollow and a bit of a cinematic vanity project of Louise Garrel. Its plot is underwhelming and feels like its there only serve to showcase Garrel as a brooding ladies man instead of a honest and deep story about love and obsession.